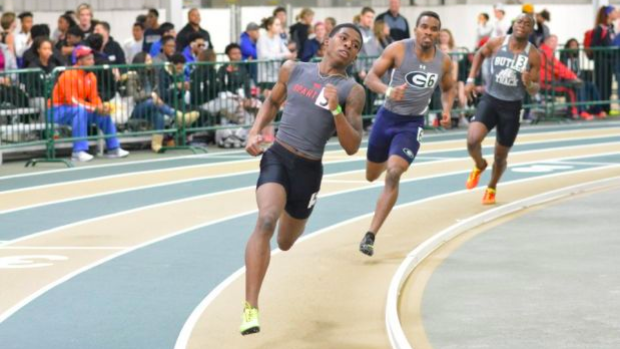 This field is loaded and there is really no one who stands head and shoulders above the rest of the field.  Bryson Godfrey (Alexander Central) ran 6.51 early on in the season, but we haven't seen him much recently.  He and Jacquez Roseboro (Parkland) have both run 6.51 this indoor season.  Joseph Littlejohn (Parkland), Kamarion Graham (C.B. Aycock) and Kamari Norman (Hillside) have each run 6.55 this season making there a minor difference amongst the top 5 boys heading into the meet.  Roseboro is the only underclassman amongst the main contenders, could he steal the title away from these star seniors?

This is probably the event I'm looking forward to the most tomorrow.  Doug Dracon and Emerson Douds (Weddington) will look to lock up the team title for Weddington as they enter the race as the top 2 seeds, but that's much easier said than done over this star field.  Savien Hayes (Parkland) has run 34.95, just behind Douds indoor PR of 34.81.  Bryson Godfrey (Alexander Central) also will double back holding a PR from November of 35.05.  Khaleb McRae (Southern Durham) has run 1:04.01 in he 500 and will double back from that event earlier in the day.  I'd think McRae can run a little faster than his PR of 35.46, but he'll likely be in lane 1.  Also star long and triple jumper Jamar Davis (Orange) comes in with a PR of 35.37.  Plus in the earlier heat Joseph Littlejohn (Parkland) remains a contender if he can post a fast enough mark to beat out the fast section!  Littlejohn has run 35.48 this season.

This looks to be like Khaleb McRae (Southern Durham) versus the clock.  We talked with him after his 1:04.01 win at the VA Showcase, but he wasn't happy to still be in the 1:04s.  This junior is hungry for fast times, and will likely just have his teammate Dominick Green, who has run 1:05.99 challenging him in the race.  Kyle Durham ran an impressive 1:06.17 last week, but I'd be surprised to see him run the 500 just before his main event, the 1000.