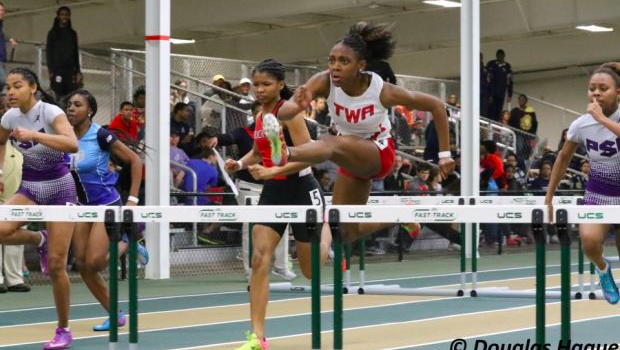 Cummings will look to score the majority of their team points in the horizontal jumps with Kelsia Moore and Jydia Faucette being the top two seeds in the Triple Jump at 36-3.25 and 35-10.75.  They'll face off with Nicole Barnes (T.W. Andrews) who took third in this event last year and holds an indoor PR of 37-4.  Barnes was the meet MVP last year and will likely do so again tomorrow.

Barnes is the top seed in the long jump at 18-6, with Micaiah Darity (Hendersonville) being the next highest seed at 18-0. Both Moore and Faucette are projected to score, but if they can have a big day and place in the top 3  it will make their squad tough to beat.

Ryan Eldridge (North Surry), Keizia Everett (Farmville Central) and Jerome Bass (Red Springs) have all cleared 50 feet this indoor season.  Eldridge has the best PR at 52-3 followed by Everett at 51-11.5 and Bass at 50-10.  Hopefully this 3 man battle will push them close to the 1A/2A State Meet record of 54-9.

Last year Nicole Barnes ran a NCHSAA 1A/2A meet record of 7.19 to win the 55m Dash title.  This year she's already run 7.08 and has established herself as one of the states best sprinters and hurdler.  She was second to Kayla Moore (Cummings) last indoor track season, but has equalled her 1A/2A meet record this indoor season in the 55m Hurdles at 8.03.  She's currently US#8 in the hurdles and US#17 in the 55m Dash and will be tough to beat unless something goes wrong tomorrow.

The girls 300 will be a very wide open event between Kaleigh Hanson (Croatan), Allysia Farrar (Cummings) and Araybian Lilly (West Montgomery).  Hanson is the top seed at 41.94 with Farrar at 42.10 and Lilly 42.18.  Freshman Alyssa Thompson Rowe (Lexington) holds a PR of 42.40 and should also be in the mix.  Hanson and Lilly will be doubling back from the 500 just a few events before so will have to recover quickly to compete in this 300.

Kaleigh Hanson and Kaitlynn Wheaton (Murphy) enter with standout seed times of 1:17.21 and 1:17.30 respectively.  They'll also face off with Araybian Lilly who won the event last year in 1:16.79, but has only run 1:19.57 this season.  This should be a battle between these three, and I'd imagine it's going to be a fight to the line.

This should be a two man battle between last year's runner-up Josh Polk (Hobbton) and Bernie Briley (West Iredell).  These two stand out amongst this field with PRs of 6.49 for Briley and 6.59 for Polk under FAT timing.  Polk ran 6.48 last year at the indoor state meet, and it wouldn't surprise me to see him go faster tomorrow.  Briley will likely need to improve on his 6.49 from December if he hopes to win tomorrow.

Polk won the 300 last indoor season and will face off with Josh Moore (West Craven), Michael Quispe (Croatan) and Dimitri Sinclair (Red Springs).  Moore has run 35.64 this year and Polk 36.08.  Quispe will double back from the 500 where he is the defending champion and will look to score high team points in the 300.

Anything can happen in a 500, and we saw it last year with Michael Quispe's teammate falling coming down the homestretch as he was able to take the win.  This year Croatan's mid distance is loaded one again with Quispe, Joseph Bulfer and Noah Bibus seeded as the top 3 spots.  The will face off with Jeremy Kankula (Atkins) who has run 1:08.7 and is very capable of winning this race.  This is a huge race for Croatan as far as team scores go.  If they can go 1-2-3 in this event they'll be hard to beat as a team tomorrow.

Alex Rodman (First Flight) will look to repeat her 1000/1600m double from last year.  She should be the favorite in the 1000 after running 2:59.23 this year.  Last year her 1600 breakthrough didn't come until the state meet where she was able to hold off Anna Bristle (Parkwood, 3A) in a battle to the line.  This year she'll have to face off with top seed Chandler Mccaslin (North Lincoln), Anna-Kathryn Kilby (Forbush) and freshman Victoria Swepson (Research Triangle).  Mccaslin has run 5:16 this year, but I'd expect this race to be won in a faster time than that.

Kilby was the 3200m state champion last year, but comes in as the second fastest seed thisy ear to Mccaslin who has run 11:10.07.  Mccaslin's North Lincoln teammate Alyssa Galvin will also be in contention along with Caitlyn Burkett (Franklin Academy).  Mccaslin has run 21 seconds faster than the rest of her competition so far this year, and I think she'll be tough to beat tomorrow.

A state title of any kind has evaded Dakota Mendenhall (Forbush) and it's hard to imagine that continuing after this weekend.  He'll compete in the 1000, 1600 and 3200.  His first event will be the 1600 where he has a PR 10 seconds faster than the rest of the field, then double back in the 1000 and 3200 where he'll be a contender in both in what will be a tough triple.

Along with Mendenhall in the 1000, Brian Risse (North Lincoln) has run 2:34.63 and Skylar Stultz 2:36.55.  Risse will be doubling back from the 4x800 earlier in the day, while Stultz should be fresh.  It's hard to see this race not going out hard and being at an honest pace between three boys that really want it badly.

Mendenhall and Risse will come back from the 1000 and compete in the 3200 off little rest.  They'll match up against NCHSAA 1A XC State Champ Conrad Phillips (Pine Lake Prep), Justin Todd (Ledford) and Nathan Richards (Franklin) who was the 2A XC State Champion this year.  Risse will be looking to put his team on the podium with a strong performance in the 3200.  He has the fastest seed time at 9:36.30.  This should be a fast pace up front from Phillips and Todd, and if Mendenhall and Risse and hold on they might be able to have better leg speed at the end.