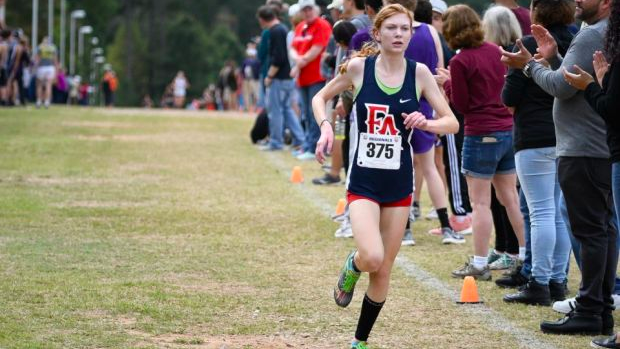 Last year Caitlyn Burkett (Franklin Academy) was not able to hold onto a surge from Michaela Gammon (Lincoln Charter) and took 2nd in the NCHSAA 1A State Championship.  This year Burkett has taken things to the next level.  She clocked 19:45 at the state meet last year, and has already run 18:59 on the state meet course this season.  She looks to be tough to beat tomorrow and is the only 1A girl under 19 minutes this year.  She ran 19:08 at the Mideast regional beating her competition by over a minute.

Who is the most likely candidate to upset Burkett?  It seems to be sophomore Abigail Hemric (North Stokes) who beat Hannah Cranford (South Davidson) at the 1A Midwest regional.  Hemric's time was 20:08, but she's run 19:27 this fall.  Hemric is also the reigning outdoor 3200 state champion from last spring.

Kathleen Burroughs (Granville Central) has had a strong senior year clocking the second fastest time in 1A of 19:10.  But Burroughs had an off day at regionals finishing 6th in the Mideast.  She'll be looking for a big bounce back performance to cap off an outstanding career.  Emy Clouiter (East Carteret) was 5th last year and won the 1A East regional by nearly 50 seconds last weekend.  Cloutier is used to running at the front of races finishing 1st, 2nd or 3rd in every race she's been in this season.

Emma Pindur (Swain County) is primarily a track girl. She's run 2:19 for the 800.  But that doesn't mean she isn't good in XC.  The senior won the 1A West regional in 20:50 and was 4th at the 1A State Championships last season.  We normally don't see the best out of her until this time of year, and it looks like she's in great form.  Freshman Victoria Swepson (Research Triangle) has the track credentials to be a star, though she's a little better on the track than she's showed this year in XC.  Swepson holds PRs of 2:20 and 5:20 for the 800 and 1600 on the track, and 19:59 in XC.  She is a great competitor and I don't think she would let anyone run away from the field without a fight.

Last year Franklin Academy edged Lincoln Charter for the 1A Girls Team Title.  This year Franklin Academy's back to defend, and look to be big favorites lead by Burkett and freshman Sam Burr.  They're 51 point favorites according to our virtual meet.  Lincoln Charter has proven they're a powerhouse program on the 1A level.  They've been without star Michaela Gammon and still are in podium contention.  Most 1A schools don't have the depth to compete when a talent like Gammon goes down, but Lincoln Charter getting on the podium tomorrow would be massive for this program going forward.  Murphy girls took 2nd to Lincoln Charter at the West regional, but have been very solid this year.  They'll look to get redemption on their regional foes tomorrow.

So far this year most of the top 1A boys have fallen out of the 1A Midwest region including Regional Champ Conrad Phillips (Pine Lake Prep), Lucas Brown (Queens Grant), Jake Baugher (Community School of Davidson) and Brent Surratt (South Davidson).  These guys went 1-4 in the regional meet as Phillips won in 16:18.  Baugher, Phillips and Brown all fall within the same conference and finished in that order.  So these guys are familiar with one another, and now a state titles on the line.

Drew Zink (Lincoln Charter) should be among the favorites coming into the race.  He won the West region in 16:45 and owns a PR of 16:39 as a sophomore.  Freshman Aaron Rovnak (Franklin Academy) got a big win last week at the 1A Mideast region clocking 17:12, and should be in contention for an all-state spot tomorrow.  Another freshman Jacob Laughlin (Mountain Island Charter) who placed 2nd overall at the West regional behind Zink.

Bishop McGuinness made a statement at the Midwest Regional meet.  They placed 5-6-7-8-9 dominating the team battle and carrying a ton of momentum into the state meet.  The could have a lot of guys place in the top 10 tomorrow if they have the same success as they did last week.

Bishop should be the team favorites tomorrow.  They handled Gray Stone Day last weekend who ranks second in our virtual meet, but placed 4th at the Midwest regional.  Franklin Academy boys were dominant in the Mideast and should be close to Bishop tomorrow, but they'll need to find a fifth man.  They have a significant drop off beyond their #4 and that could be the difference in making the podium tomorrow and not.  Lincoln Charter boys won the West over Hayesville and Highland Tech.  All three of these programs are in the hunt for the podium tomorrow if a few things swing their way.