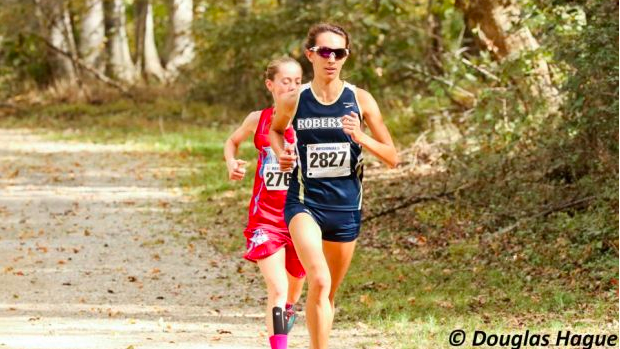 Sarah LaTour (Cuthbertson) seemed to be the favorite heading into the NCHSAA 3A state championship.  She hadn't been beaten by NC competition in a lot of close races this season, until last week.  She suffered a loss to teammate Madeline Hill (Cuthbertson) who pulled away from her over the last 800 meters at the 3A Midwest championships.  Though, knowing LaTour, if it was anyone else pulling ahead I think she would have pushed it a little harder to run them down.  The one thing this showed is that anyone is beatable, and this race is wide open for the taking.

Along with LaTour and Hill, Katherine Dokholyan (Cuthbertson), Jenna Reiter (West Carteret), Elise Wright (T.C. Roberson) and Jonna Strange (North Iredell) are contenders heading into tomorrow.  Dokholyan and Reiter have the fastest times on the season running 17:55 and 17:59.  LaTour has run 18:12, and Hill 18:22.  Reiter hasn't raced any of these girls head to head this fall.  She came into the race last year in the same scenario and took off to push the pace early with teammate and eventual champ Emme Fisher.  I expect her to do the same tomorrow.  Dokholyan has come on strong lately, but lost to both LaTour and Wright at Wendy's a month ago.  Her 17:55 came at the conference meet, and this will be the first time we've seen her go after it since that breakthrough.

Wright is the 3A West champ in a battle with Strange.  Wright crossed in 18:27, proving to herself that she's capable of winning the 3A individual title.  She clocked 18:27, 5 second slower than Hills 18:22 on the same course 30 minutes before.  Wright stated in an interview with us "I'm gonna win it" when asked about what she thought of the battle looming this weekend.  Stange's second place finish to Wright is nothing to ignore.  She hasn't seen competition prior this year, and pushing Wright to the line is pretty impressive.

LaTour's finishing speed has been ruthless this year.  We saw the emergence of this last year where she stormed form fourth to second over the final mile.  It's something all of her competitors need to keep in mind, because it almost seems like no lead is safe with the wheels LaTour has at the end of the race.

Other girls that will battle for a top 5 spot are Makayla Obremski (Topsail), Sarah Bechtel (Weddington), Frances Whitworth (Mount Tabor), Jaeden Phelix (Piedmont) and Anna Bristle (Piedmont).  Obremski has had a monster freshman year, but posted an extremely impressive 18:22 taking second to Reiter at the 3A East regional.  That should boost her confidence heading into tomorrow.  Bechtel, Phelix and Bristle have had the blessing and the curse that is a loaded Union County and Southern Carolina Conference, so they're used to their 3A competition and having to run fast.

Freshman Madeline Hill has been a star for this Cuthbertson team, but let's not forget Leah Helms, who was just as strong as Hill was in middle school.  Helms got injured in the preseason, and potentially was going to be back late in the season.  I'm not sure if she'll race or if she's fit enough to factor into the Cavs top 5, but it could be a wildcard for the Cavs is she is able to run near full strength.  At this point this is just speculation.

Both individually and team battle wise, this is the most exciting race of the NCHSAA State Championships tomorrow.  Who will rise to the occasion in the rain tomorrow?