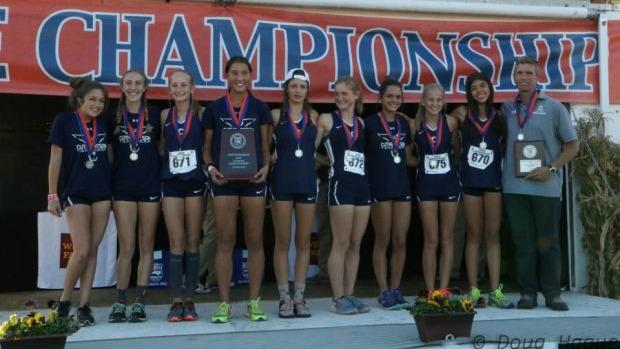 Cuthbertson girls snagged a spot of the podium last fall taking 2nd in the NCHSAA 3A Cross Country Championships powered by a second place finish from Sarah LaTour and a tight pack from 2-6.  The Cavs only lose Lexi Noch, and bring in what likely will be the strongest freshman class in North Carolina this fall.  LaTour developed into a star last cross country as a junior and should be one of the top girls, if not the top, in North Carolina again this fall.  LaTour will be the top returner in 3A this season after taking 2nd a year ago.  On the track LaTour continued her dominance earning the 3A Indoor State Meet MVP honors and doubling outdoors in taking the 1600 and 3200 individual crowns.  LaTour has fantastic speed at the end of races and she proved so last fall going from a distant 4th place into second place at the XC state championships, then posting monster final 400s at the outdoor state championships in the 16 & 32.  LaTour will return as a favorite to win 3A individually, and her 4:59 and 10:55 on the track only confirmed that.

They'll also return a sophomore duo of Annalise Furr and Gabby Castro who both broke 20 as freshman.  Gastro had an outstanding track season running 2:20  and 5:14, one of the best marks for freshman in NC.  Though Castro's XC PR is just 19:45, I think she's' more than capable of filling the #2 rill that Lexi Noch held last season.  Annalise Furr ran 19:35 as a sophomore and place 14th at the state championships as a freshman running one second off her PR on the day it mattered the most.  Furr only ran XC as a freshman for Cuthbertson, and though she's the #2 returners her fitness/health will be a question as the 2017 season gets underway.  But after a strong freshman year I'd expect her to be back and ready to go.

Morgan Allison and Delaney Patterson were both on the fringe of breaking 20 last fall both running in the top 5 during parts of the season.  They holds XC PRs of 20:04 and 20:06 respectively and both will be rising juniors this fall. Patterson had the better track season running 5:43 while Allison ran 6:11.  Charlotte Sperry will be a rising senior who had a great track season clocking 5:44 and 2:28 and could be a factor to the top 7 this fall.  Samantha Hirsch will be a senior as well and had her best track season yet running 12:23 this spring.  These girls both give the Cavs some extra depth heading into the cross country season.

The main reason Cuthbertson comes into the season ranked so high is because of a stellar freshman class including three girls that could be all state this season.  Leah Helms and Madeline Hill come in with PRs of 5:13 and 5:23 in the 1600 respectively and 11:28 & 11:27 PRs in the 3200.  These girls dominate the middle school stage of their careers, and will look forward to the challenge that high school will bring.  They also bring in Kaitlyn St. Hilare who holds a 1600 PR of 5:28 and is a little overshadowed due to the strength of Hill and Helms, but she should also impact the top 5 this season.  Kendall Gallagher, Jordan Browning and Tori Bridgforth who come into high school as sub 6 minute 1600 runners. These girls are going to bring in a lot of girls that will have to transition from 3K to 5K, but with a bunch of young talent I don't think the transition is going to be too much of a toll on them.  This will be a team to keep an eye on this spring and has the potential to be the top team in the state.