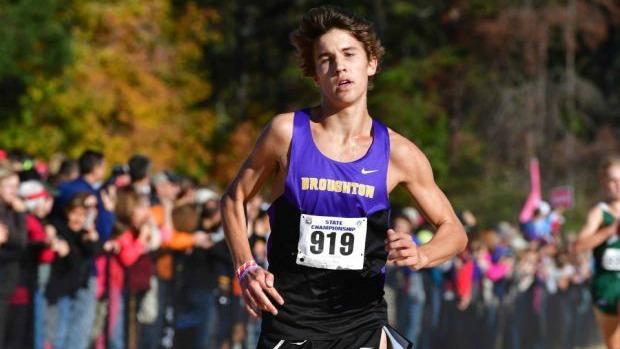 Broughton takes a big hit losing four of their top 7, but still return 7 guys that have broken 17 minutes.  The Capitals seem to take big hits every year with graduation, but continue to reload on the boys side year in and year out.  Last season Broughton reclaimed their NCHSAA 4A Team Title despite the majority of their top 7 battling sickness throughout the middle of the season.  This year is no different returning a top 3 of four seniors in Jacob Wells, Ryan Brown and Will Hopkins.  Though Wells has a better PR, I'm expecting big things from Ryan Brown this season.  Brown has been very solid in cross, but I still think he's got a lot left in the tank in XC.  Brown's season best last year was a 16:03, but on the track he ran 2:02 and 4:24.19.  I expected big things from Brown last year season, but on the track he proved that I might have been just one year too soon on his breakout.  The talent is certainly there.

Jacob Wells was a big reason why Broughton was able to win a team title last fall improving from a high 16s guy to a low 16s guy with a 15:55 PR.  Wells came up big at the state meet taking 12th overall after being 9th at the regional meet the week before.  Wells holds track PRs of 9:49 and 4:34 and holds the fastest PR on this team.  He could very well be their top guy this season and should certainly be in all-state contention.  Will Hopkins will be the only state record holder on this team, as the rest of his 4x1600 teammates graduated last fall.  Hopkins is now one year removed from transferring into Broughton from Durham Academy.  Last year in XC he was their 6th man running 16:40, but now after being adjusted to the Broughton training program he should be someone to step up for the Capitals this fall.  On the track Hopkins clocked 2:00 and 4:29 showing that he had really started to adjust to the new school.  I think Hopkins showed he had the potential to step up this fall and be a part of the Capitals top three with Wells and Brown.

Broughton will bring in a pack of boys that were on the JV squad last fall, but would likely be on any other school in NC's top 7 in Jack Rooney, Michael Rooney and Leslie Boney.  The most impressive at the Wake County Kickoff the other week was sophomore Jack Rooney who was the Capital's 3rd man running 9:33 winning the 9-10 race.  Rooney ended the season running 16:59 and was the Capitals 11th man at the end of the year.  Rooney had a short track season 4:55 in only three total races outdoors, but proved that he was ready to make a massive leap forward this fall for Broughton.  He could even be Broughton's next superstar.  Older brother Michael Rooney will be a junior this fall and returns with a PR of 16:57 from his sophomore season and will have a good shot of making the top 7 this fall.  M. Rooney ran 4:37 on the track last spring and should be in for a big year.

John Malach had a big freshman year as well giving the Captial's more depth on the younger side of their roster.  He clocked 16:57 for 5K and also ran 4:38 which is incredible for a freshman.  But Malach is going to have to fight for it if he wants to be in this top 7 with the depth of this team.  Leslie Boney will be a senior this season and returns with a PR of 16:58.  Boney showed strength over 800 meters on the track running 2:02 and running 4:46 for the 1600.  Boney will return as Broughton's 6th man this year.  Others that could have a big year an be in contention for the top 7 at the end of the year is sophomore Dylan Shankle, junior's Scott Rostick and Edward Brinkley, and senior Liam Norris.  Compared to Green Hope I think this Broughton team is extremely underrated as to how strong they'll be.  Though it's going to be really tough for them to contend with Green Hope this season nothing is given and the Captial's will look to score a massive upset this fall.  With tons of up and coming talent on this roster and great coaching from David Christian and Ryan Soloman I think this is going to be a fun team to watch this year.