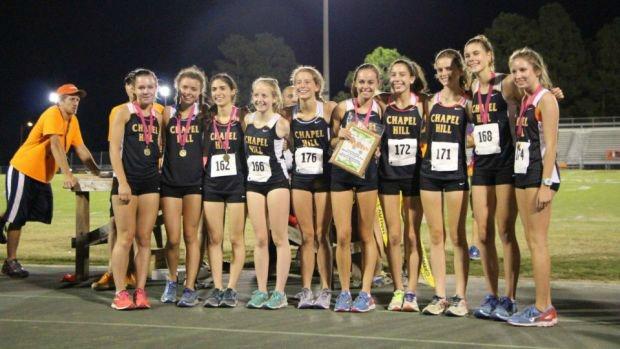 Similar to the Chapel Hill boys, the Tigers return a very strong senior class, but tons of young talent beyond that.  Chapel Hill girls were the NCHSAA 3A State Champions the last two seasons and will look to make it three straight this year.  They'll be lead by Katherine Dokholyan who has been their top girl since she came in as a freshman.  Dokholyan holds a PR of 18:12 and has been 11th, 2nd and 4th at the 3A State Championships.  She had her best track season yet running a converted 4:57 and was the NCHSAA 3A Indoor State Champion for the 1600 last fall.  She's been close in the past to being the individual cross country champion and will be the #3 returner in XC in that classification this fall.  Dokholyan's early season 4:57 on the track showed me that she's stepped her game up, and if she can come into the season in that form she will be tough to be this fall.

Anna Stouffer will also be a senior this fall and made the top 7 for the first time last season ending her season taking 10th at the Mideast regional.  Stouffer holds a PR from the Jungle Run of 19:11 where she took 6th overall.  Stouffer ran 5:19 last fall though focuses on the middle distances the majority of the track season.  Stouffer's times died off a little at the end of last season.  With 3A being very strong this year the Tigers will need a little more consistency out of her.  Madi Marvin is another girl who is more mid distance focused, but has been a star for them in XC as well running 19:21 to take 9th at the 3A State Championships.  Marvin was on the Tigers 4x800 State Championship squad last fall and ran 2:22 and 5:28 on the outdoor track.  She's always run well at the XC State Championships the last three seasons placing 24th, 12th and 9th so you can expect her to be strong once again this fall.

Grace Tate holds a track PR of 11:36 in the 3200 from 2016, though the progression didn't fully continue in XC last fall or on the track.  She holds a PR from 2015 of 19:25 and ran 19:32 last season.  Despite not fully meeting her track potential on the track she still had a good season running 19:54 at the state meet taking 20th overall.  On the track last fall she was 9th overall in the 3200 at the state meet and could still be in for a big cross country season.  Lilly Crook came on very strong last year as a sophomore running 5:35 on the track and 12:00 for the 3200 making the outdoor state meet taking 8th overall.  Crook also took 17th in XC in her first year in the top 7.  Her PR is 19:34 and she was consistently in the top 7 last fall, which isn't an easy feat.  As a freshman she wasn't under 20 minutes, but she was able to break 20 many times last fall.  Crook is the 5th overall returner on this team based off time, but can very well be higher than that.

The depth of this Chapel Hill team is going to be crucial this fall with two additional sub 20 girls in Lena Cohen and Maggie Springer.  Cohen and Springer were both outside the top 7 last fall, but should make the jump this year.  Cohen had a great year on the track running her two PRs of 5:42 and 11:54.  Springer's XC PR is 19:53 and ran 5:29 on the track and could be in for a big year in cross country.  She's a rising junior that took 5th at the 3A Mideast regional in the 1600 last year.  She did make he top 7 for states after not running regionals taking 34th overall.  Mia Hoover returns with a PR of 20:54 and will look to crack the top 7 this fall.  Megan Marvin ran 2:16 for the 800 last fall taking 3rd at the state championships.  Though she's more of a middle distance girl she could influence the top 7 as a sophomore.  There is so much talent on the Chapel Hill squad it's going to take being under 20 minutes and then some to make this team.  This gives them plenty of options going into the state championships to ensure they're bring a solid squad.  Chapel Hill certainly has what it takes to make it 3 straight NCHSAA 3A team titles, and very well could be the top team in North Carolina this season.