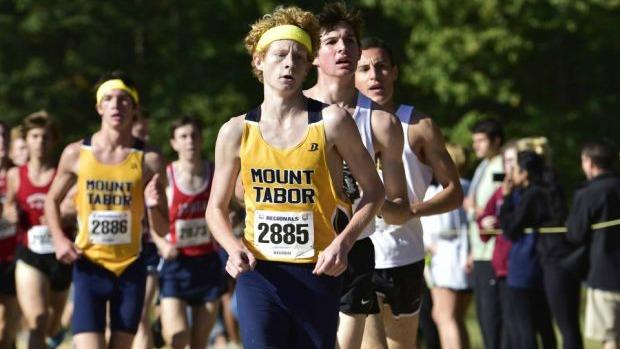 Mount Tabor will yet again be strong in cross country returning their top 4 boys, though having a big gap back to their 5th.  Despite not having a 5th, Tabor's top 3 is likely going to be the best in North Carolina lead by possible to individual Cameron Ponder.  Ponder has already proven he's a superstar becoming North Carolina's first junior to break 9 minutes in the 3200 running 8:56 and taking 3rd place at Penn Relays running 4:11.46 for the full Mile.  Ponder took 2nd to Connor Lane at the NCHSAA 4A State Championships after being slightly banged up at the end of the cross country season.  If this season is any similar to last season Ponder might again forgo the beginning of the year to focus on late season meets.  Last year his first meet was on October 1st at Wendy's.  If this is the case you likely won't see the Spartans as one of the top teams in the state until late in the year.  Hopefully we get to see Ponder healthy this season as he could have a year like Connor Lane did last fall.

Michael Moerk will return as an all-state runner for the Spartans last season improving from 55th to 10th at the NCHSAA 4A State Championships.  This year with the Spartans moving down to 3A Moerk has the talent to be in the top 5 at the state championship.  Moerk improved significantly in XC last fall holding a PR of 15:58.  On the track Moerk ran 4:19 for the full Mile before having an unfortunate end to a great track season coming up injured at the state meet.  If Moerk can stay healthy through this season he's certainly talented enough to be one of the top guys in North Carolina.

Charles Pace had a very underrated season last year running 16:10 and later on taking 26th at the NCHSAA 4A State Championships, then running 9:37 on the track.  Pace has developed very well over his high school career and I don't think he's tapped into his full potential yet.  Pace also ran 4:27 on the track in the 1600.  He should certainly be a sub 16 man this year and will be in the mix for an all-state finish in 3A this season.  Having as strong of a 3rd man as Pace is is the main reason we have Tabor ranked so highly.  William Scurry had a great sophomore year and really came into form for the Spartans as their #4 last season.  In cross Scurry went form a 17:19 man down to 16:31 and took 33 seconds off his 3200 on the track running 10:02.  They'll look for Scurry to have a big junior year as the Spartans look to claim their first NCHSAA 3A Team State Title.

Where the Spartans will look to improve the most is with their 5th man.  Last year they were just one guy short of having a really strong team.  We've seen runners have massive breakouts for Mt. Tabor in the past and I think they have plenty of candidates to do so for them this year.  Max Thomas, Hayden Coty and Jon Spaar had strong track seasons and will likely be fighting to be Tabor's 5th this fall.  Spaar has the best XC PR of 17:55 with Coty and Thomas not far back with low 18 PRs.  Thomas ran 4:43 and 10:40 on the track and looks to have taken big steps forward compared to last year.  The pressure is certainly on for someone to step up as their 5th runner as it looks like Tabor's 3A Team Title hopes will depend on the success of their 5th man.  Tabors advantage is they can score 3 runners ahead of 3A competitors Chapel Hill and Weddington's 1st man.  But if they don't have a 5th step up they can easily be off the podium as both the Tigers and Warriors have a tight pack of 5.  So the Spartan's depth will be something to watch throughout the season.