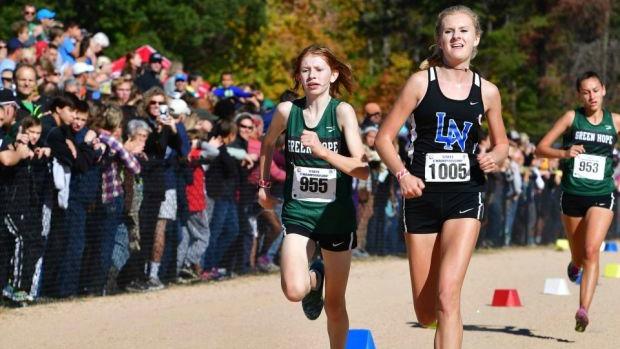 Green Hope girls have been second in 4A the last two seasons and look to be a podium threat once again this fall.  The Falcon's did lose 2 of their top 5 girls from last season, but as always they're going to reload.  Alessandra Rodriguez was their 4th girl last fall, but will likely be their top returner this season.  As a freshman Rodriguez ran 18:45 her freshman year and held a best mark of 19:07 last fall.  She's racked up a 17th and 15th place finish at the state meet.  I'd project her to be in the top 10 this fall after running 2:17 and 5:02 on the track.  Rodriguez was able to doubled back after an off race in the 1600 at states to place 4th in the 800m at the NCHSAA 4A State Championship.  I'd expect Rodriguez to be a leader on this team even though she probably prefers the track a little better than XC.

Kelsey Vogel had a strong freshman year taking 14th at the state meet and running 18:49 at the end of the season.  On the track Vogel continued to have success running 11:21 in the 3200 taking 7th at states and running 5:25 in the 3200.  Vogel is certainly stronger over the longer distances and should be in for a big sophomore year if she continues to progress.  Catherine Holbrook returns as Green Hope's 3rd girl and ran 19:35 last fall in her first ever XC season.  Holbrook doesn't run track, but seemed to have instant success in cross country taking 31st at the state meet and running as their 5th this season.

Green Hope brings in two twin sophomore transfers in Tess Davila and Zoey Davila.  The Davila's come in from Dunlap High School in Illinois.  Tess had the stronger freshman year running 18:22 for 3 miles and then 5:19 on the track.  Zoey comes in with PRs of 5:41 and 11:38 for the 1600 and 3200.  The twins were the Falcon's top two girls at Wake County Kickoff the other week, though Rodriguez didn't race.  Both should be a big boost to their top 5 this fall and should combine with Vogel to give the Falcon's a really strong sophomore class on the girls side.  Another sophomore who had a strong year on the track was Sophia Veilleux who holds an XC PR of 21:05.  On the track Veilleux ran 5:37, though she only ran 5 races during the season.  I expect she has a lot more in her on the cross country course.

Morgan Peele is another girl that only really runs cross country for Green Hope and was in their top 5 last season running 19:54 and taking 56th at the NCHSAA State Championships.  It's taken her a little while to get into peak form the last two seasons.  Meg Penaganti also returns as a top 7 girl from last fall with a PR of 20:28.  On the track Penaganti clocked 5:46, a little off her freshman year PR of 5:37.  Last year was her first XC season, so now that she'l be more comfortable running the 5Ks.  Emma Benson also gives Green Hope a lot of depth as she holds a PR of 19:56 from 2015.  They had a strong showing from incoming freshman Megan Benson at Wake County Kickoff who took 7th in the 9/10 race.  Though Green Hope girls now under coach Julie Ross, I don't expect anything to change this season.  In recent years you could always expect these girls to always be in the hunt for a team title and this year is no different.