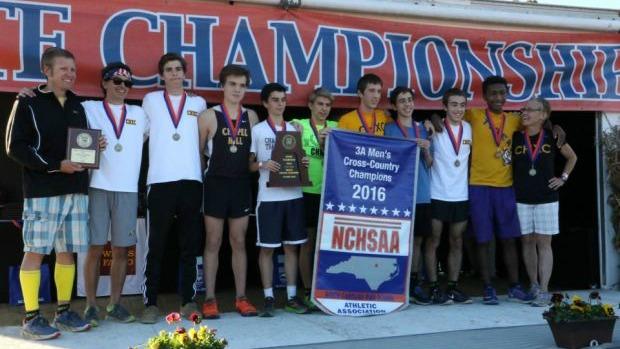 Chapel Hill boys have been really good the last few years, and a big part of their success has come from having a stellar class of 2018.  In 2016 the Tigers won the NCHSAA 3A XC State Championship scoring 86 team points with a 16:45 average and 0:17 second 1-5 gap.  These boys utilize their depth to the fullest not having any front runner, but a full team of 7 that can be their #1 man on any given day.  Nat Romaine will return with the top PR on the team from last season running 16:18 at the Jungle Run, though that was the first race of the season and he didn't beat that mark the remained of the year.  Despite that Romaine was still much better in XC over the year running faster on certain courses than he had as a sophomore.  Romaine has track PRs of 4:38 and 10:04.  Romaine was the Tigers top guy at the state meet last season taking 16th overall.

Ryan Combs will return as Chapel Hill's #2 and had a good track season running 4:38 and 9:53, significantly faster than his sophomore year.  Combs never broke 17 as a sophomore, but in his junior year was under 17 many times and took 23rd at the state meet.  Combs does have a lot more to do in XC and this could be the year he make a big progression.  Silas Buckner has been the best on the track the last two years and has run 4:29 the last two seasons, and last season took 10th at the 3A State Meet.  In XC last fall Buckner had a big improvement going from a high 17s guy down to 16:48 taking 25th at the state meet.  As a sophomore Buckner was outside the Tigers top 7.

Eli Turner is another senior for the Tigers returning as their #4 holding a PR of 16:46.  He posted a lot of sub 17 performances last fall being very constant throughout the year.  Turner didn't run track last season, but did Pole Vault during the year.  Rising Junior James Clabo was the Tiger's 6th man last fall and seems to be ready for a big improvement this fall.  Clabo returns as a low 17s guy with a PR of 17:01 and should be ready for a big progression this fall.  Clabo improved on the track running 4:41and clocked a 10:04 3200 indoors taking 8th at the 3A Indoor State Meet.  They'll also bring back Jacob Meredith-Andrews who holds a PR of 16:51, but missed the top 7 heading into the state meet as his big PR didn't come until NXNSE.  Meredith-Andrews ran 4:40 outdoors and 10:04 indoors last fall and should impact their top 5 this fall.

Chapel Hill returns a ton of depth in Jason Dadolf, Zeno Scotti, Tyler Yandrofski and Agustin Fiorito who will be able to contend for a top 7 spot and all were under 17:30 last fall.  It's rare that you have guys of this caliber not returning within your top 7, but that's what makes Chapel Hill so strong.  Rising sophomore Owen Rogers also stepped up on the track running 4:57 and 10:28 on the track.  If the Tigers didn't have enough depth already they'll bring in Ethan Mathis who ran 2:06 and 4:36 for the 800 and 1500 in middle schooler.  His dad was a stud running 1:47.5 at UNC and was an Olympic Trials Qualifier in 1992.  So keep an eye out for him this season.  They'll also bring in Ben Hawley and Max Reisinger who ran 4:51 and 4:57 as middle schoolers.  Though the Tigers should have a ton of seniors in their top 7, it doesn't look like their going anywhere anytime soon.  This is going to be a tough top 7 to make this fall, and some really talented XC runners will end up on the outside looking in come the regional meet.  Can they defend their NCHSAA 3A team title over Mount Tabor and Weddington?