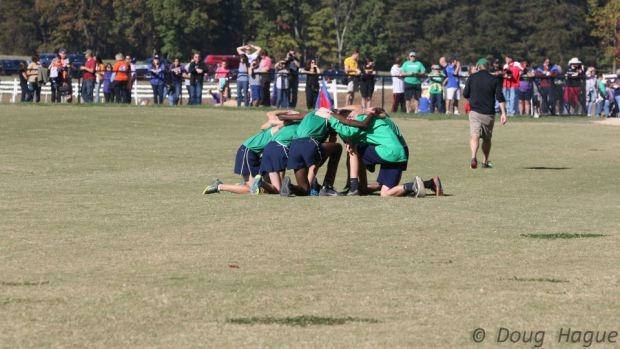 Last year after coming into the cross country season losing their top 4 runners from the team that was 3rd at the NXN Southeast Regional.  Coming into the year Weddington was ranked 32nd in North Carolina in the returning rankings and didn't make our top 25 countdown.  Though it looked like a rebuilding year for this team this team didn't have any plans on needing to rebuild, through lots of hard work the Warriors ended up 2nd a the NCHSAA 3A State Championships ranking 13th in NC at the end of they year. This year Weddington return as the 10th team in NC by our database, but after a big outdoor track season it looks like the Warriors will be contending for a 3A XC State Title yet again.

Weddington returns a very strong junior class and won't lose much from this team heading into the 2018 season.  I may be a year early on these guys, but their success on the track leads me to believe otherwise.  Top returner will be Kyle Durham who was their #2 last season running 16:33.  Durham his sophomore track season Durham was an absolute stud running 1:54.6, 4:29, and 9:43 showing a great range over the three distance events.  Last year was Durham's first season running XC and he placed 35th in the state.  I think after having a big year on the track he's going to have a lot of confidence that he can be one of the best kids in the state.  Durham is a tremendous talent and should show his range goes from 800 up to 5K this season.

Will Mazur had a big sophomore year in XC going from a guy that hadn't broken 18 to running sub 17 three times at the end of the season.  Mazur holds a PR of 16:45 in XC and was 31st at the state meet last fall.  On the track Mazur played a big part in their 4x8 state championship team and also took 6th individually in the 3200.  He holds track PRs of 1:58, 4:31 and 9:46.  Similarly to Durham, Mazur has great range, but tends to favor the longer events a little more.  After watching Mazur on the track this season he could be their top guy this season and I think has the potential to be in the top 10 in 3A this season.  Last year Stephen Larson was Weddington's 5th man running 17:00 improving 50 seconds from his freshman year and being a lot more consistent over the course of the season.  Larson ran 2:00.99 and 4:37 this outdoor track season.  That's 10 seconds faster in the 800 and 19 seconds faster in the 800.  Though Larson slightly broke out last season, I don't think he's come close to his cross country potential.

Weddington also returns Jake Toomey and Ethan Vanwynsberg from their top 7 last fall.  Toomey was a stud as a freshman running 17:03 then following it up running 4:43 and 10:17 on the track.  After seeing a lot of sophomores explode for the Warriors last fall Toomey could be in for a big season after getting used to the high school training.  Vanwynsberg will be likely the lone senior in this top 7 this fall and will be putting it all on the line to lead this team back to the podium this fall. Last year was his first XC season where he ran 17:30 and also improved a lot on the track running 4:45, 35 seconds faster than the year before.  Also Jackson O'Hara broke out on the track this fall running 4:42 and 2:03 and should come into the season in much better form that last year.  O'Hara ran 17:35 as a freshman, but last fall only held a seasons best of 19:02.  O'Hara looks to have gotten back into shape and should impact the top 7 this season.  Also they'll bring in some strong freshman this season that should impact the top 7 this fall lead by Krystopher Durham who has run 4:55 for the 1600 as a middle schooler.  His transition to the high school stage will be one to watch this fall and Durham could end up as the top freshman during this high school cross country season.