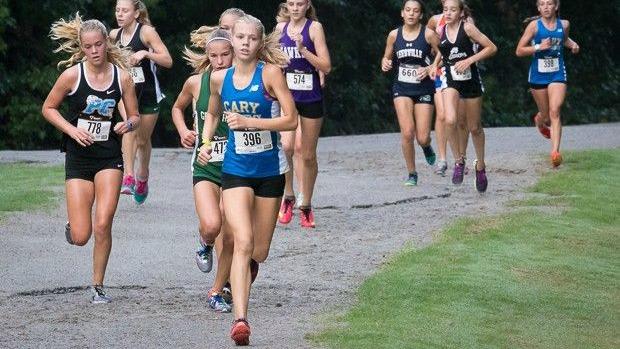 Cary Academy does take a big hit with the graduation of 3-Time NCISAA XC State Champion Sarah Bodmer and Emily Lane.  Last year they had the best year in program history taking 6th place at NXN Southeast.  This season they'll be propelled by a very strong top 3 in senior Athina Zodl and sophomores Ava Lathan and Lia Lathan.  Zodl is likely a lone senior in the top 7 this season for the Chargers and will look to lead this young squad to a repeat NCISAA 3A State Championship.  Zodl has run 3:38 and 5:32 on the track and 18:56 last season.  Zodl's 18:56 came at the NXNSE regional last year where she took 47th overall. Zodl also came up big for the Chagers at the NCISAA 3A State Championships taking 4th overall.

Lia and Ava Lathan were a massive part of Cary Academy's team success coming up big as freshman running 19:18 each.  They typically run side by side and hold similar PRs.  Lia has run 5:31 and 11:41 while Ava's PR is 5:29 and 11:45.  They took 9th and 10th at the NCISAA 3A XC State Championships last fall and were the Chargers 4th and 5th girls.  Despite peaking a little bit early last fall I still think these twins are the real deal.

Suki Bristol had a big season last year in XC for the Chargers running 20:31.  Bristol held a PR of 22:11 after her freshman year and cut that down big time her sophomore year.  Bristol ran 6:06 on the track setting a new PR, but if she's going to help influence the Charger's top 5 this season she's going to need to continue to improve on the XC course.  Keely Murphy took major steps for the Chargers on the track last fall.  As a freshman Murphy was just as good as the Lathan twins clocking 5:31 and 11:57.  Murphy ran 20:47 at the end of the 2016 season progressing with each race throughout the year.  Murphy looks to be a big boost for this team as the XC season gets underway.

Cary Academy does have a secret weapon that we may or may not see during Championship season this fall in Olivia Frazier.  Frazier is a star Field Hockey player as well as a track star running 5:03 and 2:20 as a junior on the track.  Frazier has proven to be an outstanding athlete based off her track success, and the Chargers may need her this fall to help defend their NCISAA 3A Team Title.  She has never run XC and was not on the super team Cary Academy had last season, but if they're able to borrow her at the end of the year she seems talented to make an impact regardless of how much training she's done.  Hannah George returns with a PR of 20:46 and had a much strong track season running 5:34 and 12:13.  George is also a rising junior and missed out on the top 7 last fall. George did come on strong at the end of the season though and should break 19 this season for certain.  This team is loaded with athletes from the class of 2020 and will be a force the next few years.  But can the Charger's make it three straight and continue their NCISAA streak this fall?