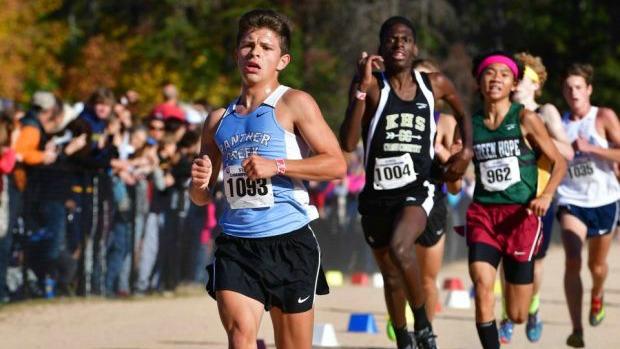 Panther Creek had an up and down 2016 XC season going from 6th in the SWAC Championships to 3rd in the Mideast region with just 10 days in between.  The Catamounts eventually went on to take 8th at the NCHSAA XC State Championships.  The lose two of their top 5 runners, but return tremendous depth this season.  Top returner will be their senior lead Jarred Komyati who ran 16:22 last season peaking at the perfect time finishing 21st at the state meet.  Just the week before he was 33rd at the regional meet and 31st at the conference meet.  Komyati had a strong track season running 4:35.98 for a full Mile and 1:59 for the 800 which both were big PRs.  Komyati has been a four year varsity runner for Panther Creek, and will look to lead to be the most success in his tenure at the school.  But a big thing for the team success this season will rely on his being consistent throughout the year.

Joey Bream had a big sophomore outdoor track season running 4:35 for the full Mile and 9:50 in the 3200.  Bream took 7th overall at the 4A Mideast region in the 3200.  In cross country Bream took massive steps forward last fall finishing as PC's #3 man running 16:22.  With Bream's track success it leads me to believe that he can take another step forward in XC and should be up front leading this team with Komyati.  Last year Bream spent most of they year fighting to stay in the top 7 in his first year on the varsity squad.  Now Bream will return with a lot of experience and a lot of confidence after a great sophomore year on the track.

Christian Alvarez ran 16:38 as a freshman, and 16:44 as a sophomore.  Both years he was able to set his seasons best at the regional meet.  The difference between this season and last season is Alvarez did run track last season while he missed the 2016 track season.  Alaverez ran 4:49 last spring and hopefully running year round will help him reach his full potential on the XC course this season.  Mark South could be a star in the making for Panther Creek after cracking the top 7 as a freshman holding a PR of 16:58.  South continued to be strong on the track running 4:45 for the 1600.  South pretty much PRed with each race of the 2016 season.  I'd expect him to be a little better heading into this season and he should be a top 5 guy for the Catamounts.

Panther Creek had another trio of freshman that ran faster than South on the track in Ian Harrison, John Monroe and Carson Lundin giving them massive upside for this season.  They ran 4:42, 4:42 and 4:43 last fall.  They also had Andrew Monroe at 4:48 as a freshman last fall.  Harrison was their star running 9:59 for the 3200 qualifying for the 4A Mideast region.  Lundin had the best PR out of this freshman group in XC running 17:51.  With some very fast track times you can expect this group to break out being big for Panther Creek this year.  I'd expect all of them to challenge to make the top 7.  Beyond this season with so much freshman and sophomore talent you know the Catamounts are going to be a distance powerhouse over the next few seasons.  They'll also return senior Ryan Moore who ran 17:17 last fall dropping 50 seconds off his 2015 PR.  Moore will return giving PC a lot of depth and will be someone expecting to return to the top 7 again this fall.  It's going to be a battle within a team this fall to watch as to who it is making the top 7 when championship season comes around.  And I think this competition amongst a lot of young athletes will help take this Panther Creek team to the next level.  I think this team has all the upside in the world to be a podium team in 4A at the end of the season.