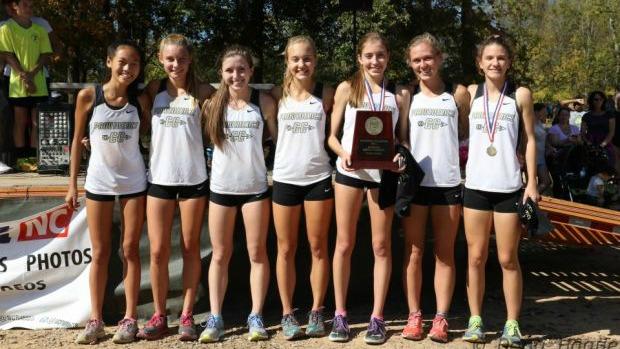 Last year Providence had a very strong 1 through 7 that normally posted a 1 through 7 spread of less than a minute. They lose their top girl Lindsey Lanier and Morgan Shires from their top 5, but are returning a very strong squad this season.  They do undergo a coaching change as long time coach Kurt Niedenzu has retired, and boys coach Steven Tournajoe took command of both the girls and boys during the outdoor track season.  Sarah Parrish will return as the top girl for the Panthers and has been great in XC over her career so far.  Parrish holds a PR from her freshman season of 19:19, but the was on the old shorter McAlpine course.  She holds a seasons best from last season of 19:42 as took 8th in the 4A West.  Parrish is a three year varsity runner for Providence, and I think the best has yet to come from her.  Parrish ran 5:15 and 2:21 last season on the track last spring.  She's going to be a leader for this team this year, so the Panther will be looking at her to lead this pack this fall.

Rising junior Amanda Watson had a major breakthrough last fall being much more consistent throughout the season after missing the top 7 as a freshman.  Watson holds a PR of 19:45 which she ran at the state championships placing 37th overall.  She focused on the 800 during the outdoor season running a new PR of 2:24 and also ran a big 1600 PR of 5:26.  Watson returns with a lot of experience and should had a big junior year ahead of her.  Jan Hu is a rising senior for Providence that has been very consistent over the last two years in XC.  She has run 19:56 and 19:46 in two seasons.  Hu was consistently in the low 20s last fall and finished 58th at the state championships.  On the track Hu had a short season, but ran a PR of 12:14 for the 3200 and 5:49 in the 1600.

Seniors Catherine Halley and Meghan Noon also return from Providence's 2016 varsity squad and both were in and out of the top 5 throughout the year.  Noon ran a PR of 20:20 last season then clocked 5:35 on the track, 14 seconds faster than her sophomore year.  Noon progressed a lot last season, but she's struggled at the state meet the last two years.  Halley didn't run outdoor track last season, but holds track PRs from 2016 of 5:32 and 11:49.  Her XC PR comes from her freshman year of 19:45 and she ran 20:29 taking 69th in 4A last season.  Halley did run indoors, so it leads me to believe she battled an injury outdoors.  They'll need Halley back and healthy so she an compete with this pack of 5 they have up front.

Providence also returns a lot of depth with a few break out candidates on their squad including Taylor Houston and Makenna Lanier.  They ran 5:46 and 5:58 respectively on the track last spring.  They hold XC seasons best from 2016 of 21:02 and 21:16.  Can these two take the next step in their running careers and contend to be a top 5 girl for the Panthers?  If Parrish can turn into a strong low stick for Providence and the rest of their top 7 can run as a strong pack as they did last year Providence can be even better than they were last fall.  Over the last few years Providence has always had a strong #1 in Bianca Bishop, Grace Sullivan, Kayla Glova and Lindsey Lanier.  Providence has won the 4A West team title the last two years and will be the favorites to continue that streak this fall.  They also return at the 3rd best team in 4A this year and should challenge for a podium finish in a tough battle with Green Hope, Apex, Broughton and plenty of other teams.