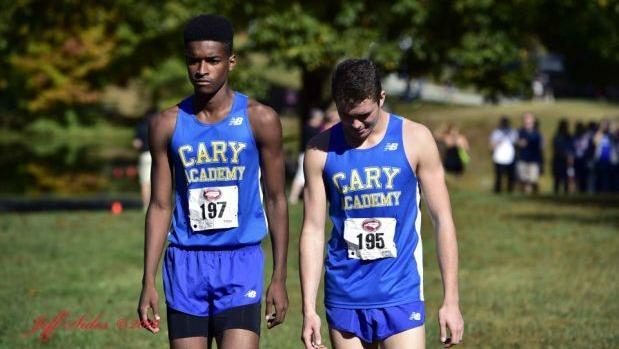 Cary Academy dominated at the NCISAA 3A XC State Championships the last two years and will look to make it a three peat this season.  But this should be their toughest challenge yet with NCISAA 3A rivals Durham Academy, Providence Day, and Forsyth Country Day all returning very strong squads this fall.  Cary Academy does have the advantage of returning 2 time NCISAA 3A XC State Champion Coleman Mitchell once again this season.  Coleman Mitchell was outstanding last XC season running 15:21 at the Adidas XC Challenge despite a cold.  Mitchell did miss some time after that race, but came back to finish the season strong with TISAC and NCISAA 3A Individual titles.  Mitchell returns after a strong year on the track running 4:18 and 9:18 his junior track season.  Mitchell has been a force for Cary Academy ever since he ran on their varsity squad as a middle schooler.  This will be his senior year and Mitchell very well could be the top runner in North Carolina this season.

Chase Coley will also return as Cary Academy's #2 man and was 4th overall at the NCISAA 3A State Championships last season.  Coley ran 15:58 last year in XC, though I think he had a slight injury holding him back leading up to the state championships. Coley proved on the track that he isn't too far off the top 3 NCISAA 3A returners and will contend for the top 3 this season.  Coley ran 4:25.66 and 9:46 Spring and taking 3rd place in both events at the NCISAA 3A State Championships.  Cole has been a major part of Cary Academy's team success over the last two seasons, and I think his time to grab the spotlight could come this season.

Dylan Lamphier came up big at the end of the season last year earning an all-state spot in the NCISAA taking 10th overall at the 3A State Championships.  Lamphier matched his 3200 PR on the track running 10:17 and improving from 13th to 7th at the NCISAA 3A Outdoor State Championships.  Lamphier broke 17 for the first time last season, but this year will be Cary Academy's 3rd man most likely.  He'll need to try and close their 2 to 3 gap as much as possible.  Krishan Guzzo regressed slightly over his sophomore season after running 16:58 as a freshman.  Last year his PR of 17:33, though that was at the start of the season and he didn't race during the championship season.  Guzzo came back on the track and just missed his 1600 PR of 4:48 running 4:49.  Bringing Guzzo back healthy this XC season will be big for Cary Academy as they need someone to step up if they want similar team success as 2016.

Cary Academy will need to develop a 5th man this season.  They graduated a lot of their depth last spring.  They'll bring in two freshman from their middle school program in Marvin Koonce and Matthew Crow who ran 5:11 and 5:17 in 8th grade.  It's tough to transition to high school cross country, but both could impact the top 7 this fall.  They'll also return Abe Weinstein who was in the top 7 last fall running 17:43 and taking 35th at the NCISAA State Championships.  Grant Scotto will be a rising sophomore after a good freshman year running 18:21 followed by a 5:07 on the track.  Something I'd love to see if Cary Academy's stud freshman Wayne Faison try his hand in XC.  Faison clocked 1:57.67 during his freshman year for Cary Academy, but is more of a 400/800 runner.  He seems like he's certainly talented and could possibly impact the top 7 this year if things go well.  But I'm not expecting to see him on the XC team, it'd be more of an added bonus.  Cary Academy certainly has some questions within their top 5 heading into the season.  But the NCISAA 3A Team Title is on the line, and they'll do whatever it takes to defend it.