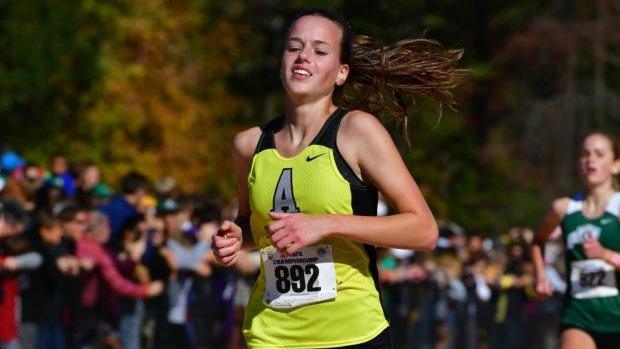 Apex returns a very strong low stick in Calli Parlier who came on very strong during championship season last year.  Parlier capped off the year placing 5th at the regional meet, followed by 8th at the state meet and 20th at NXN Southeast earning Third Team All-Region honors.  Parlier followed up a strong XC season with a 2:18 80, 5:04 1600 and an 11:06 3200.  Parlier qualified for both the 800 and 1600 at the 4A State Championships and took 3rd and 7th respectively.  Parlier is the #4 returner for 4A this season and I think she certainly is amongst the contenders to win the 4A Individual title this year.  She'll be a very solid low stick this season for Apex and I'm expecting big things out of her.

Behind Parlier up front will be a very tight pack from 2 through 5.  They lose three girls from their top 7 last season, but have a lot of depth coming back.  This is lead by two sub 20 girls in sophomore Brenna Dolan and senior Alex Wilkinson.  After starting out the year on the JV squad Dolan came on really strong for Apex narrowly making the top 7 by regionals then becoming their #2 girl by seasons end.  Dolan was a 21:46 runner in her first real high school race and ended they year at 19:50 and 43rd in the NCHSAA 4A.  Alex Wilkinson was more of a middle distance/sprinter during indoors running 300s and 500s.  But in only running two real XC races she clocked 19:57 and 20:28.  It's going to be difficult to judge where she's at since she didn't even finish the 2016 season and didn't run outdoor track.  But she seems super talented if she is running cross this year.

Abby Farrell is a rising junior who regressed slightly on the track last seasons, but improved in XC running a PR of 20:34.  Farrell holds a PR on the track of 5:48, but was slightly slower last season running a bit of 5:54.  I think competition within the team and high exceptions heading into the season can drive her to success this fall.   Lindsay Hayden had a pretty solid year on the track running 5:37 in the 1600 and 2:25 in the 800.  Hayden returns as Apex's 5th girl and should be in for a big year after improving over a minute from her freshman to sophomore year.  She should go from squeaking into the top 7 to a consistent scores for the Cougars.

Apex returns depth in Jenna Stevens, Avery Andolina and Andrea Mesa as well.  Jenna Stevens actually has the second best PR of the team and was a varsity runner her freshman and sophomore year.  As a freshman Stevens ran 19:43 and 20:02 as a sophomore.  She had an off year last season, but after running PRs on the track of 5:47 she looks to be coming back to her old self.  Andolina should be in for a breakthrough on the rack after setting a 25 second PR on the track last fall in the 1600 of 5:55.  I'll expect her to shatter her 22:13 XC PR this season.  Mesa has went from 7:10, to 6:21 to 5:59 in three years of outdoor track.  Her improvement in XC are similar as she'll look to be a major success story after starting her running career off with a 30:13 5K to contending for the varsity team as the senior.