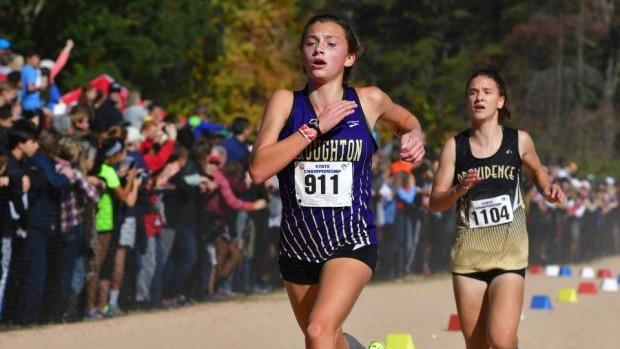 Broughton girls took 4th place in 4A last season and have the potential to be even better than that this season returning a very deep girls squad.  They don't seem to have any superstars, but could have one of the lowest 1-5 spreads in the state this season.  Annabelle Atkinson and EJ Fuller will return to the team after missing the track season due to soccer.  But they return as Broughton's 1 & 3 respectively.  Atkinson holds a PR of 19:39 improving on her season best from her freshman year of 20:00.  Atkinson did take a little while to develop into top form last season, and didn't come close to breaking 20 until she did so at the state meet.  I assume this season will be like last and take her a while to get into the swing of things.

Anna Simmons had a really big sophomore year for the Capitals running 11:48 and 5:21 on the outdoor track.  In cross Simmons developed from a 21 minute 5K down to a 19:52 runner, and after her strong track season I think she's got a lot of room to grow in XC.  Simmons almost qualified as an individual to the 4A State Championships on the track in the 3200 taking 5th at the regional. She seems to be the girl that's taken the biggest leap this season on the track. EJ Fuller came back from the lacrosse season last year in just as strong of form as she was her freshman year and improved over the season down to run 19:59.  Similarly to Atkinson it'll likely take her a while to get back into sub 20 shape.

Emma Lyon had the strongest track season of the returning group, though battled injury throughout her junior year.  She only ran the 800 and 1600 last spring once each, but was very impressive clocking a 2:24 and a 5:21.  In XC last fall it was a similar story where she only ran two races for the Capitals, neither the regional or state meet despite having a PR of 20:42.  Regardless Lyon is a super talent based off what she's run with so few races under her belt.  If Lyon can stay healthy throughout the season she could be the top girl for Broughton this fall.  Emma Trowell should also be ready for some big improvement in XC this season as she had her best outdoor season year clocking 2:27 and 5:33.  Trowell also was great on the XC course shaving 25 seconds off her PR at the end of the season running 20:15.  She is a rising senior, so should be very determined and be a leader of this squad.

Sarah Grimes holds a PR of 19:57, but had a short season last year not racing past Oct. 8th.  Grimes ran 5:31 outdoors last year qualifying for the 4A Mideast region as an individual, but holds a PR from 2016 indoor track of 5:24.  The Capitals need to bring her back into her sophomore season form and it'll really shoot Broughton up in the rankings.  They also have Ava Neijna who they'll hope to bring back to the squad.  Neijna ran 19:42 as a sophomore and has only run one year of XC and two years of indoor track as a rising junior.  Since she game back and had a strong indoor season I'd assume she was injured during XC.  She holds an indoor 1000 PR of 3:07.60.  Broughton certainly has the talent and have been a historically strong program in NC with great coaching.  But they'll return with question marks surrounding a lot of their key athletes this fall.  I think it could be until the end of the season until we really see how strong this Capitol's team is.  If these girls run to their potential this season there is no question they'll be capable of being a podium team at the state meet.