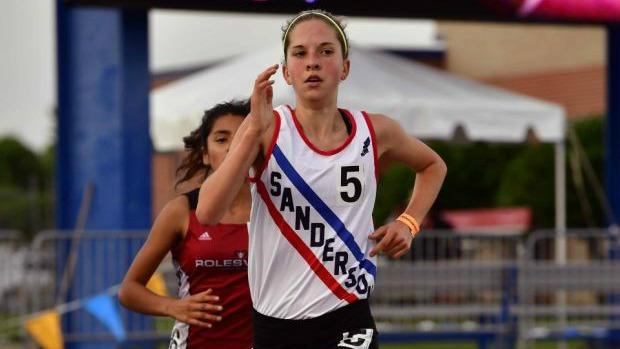 Sanderson girls were 7th in the 4A Mideast region last year, but return their entire top 5 from the team that was ranked 25th in NC at the end of last season.  They return a very strong front two in Lila Peters and Lauren Ammons, but will need some other girls to step up this season if they're going to advance out of the 4A East this season.  Lila Peters is a star in the making this season after starting her first year of running last season.  Peters was consistent last year in big meets running a PR of 19:27.  She was 12th in the Mideast region then 64th at the NCHSAA 4A State Championship.  Peters ran 11:21 on the track only losing one 3200 all season at the state championship where she took 8th overall.  Peters won the 4A Mideast 3200 this year which is always a very strong field.  I think Peters is certainly capable of being a top 10 runner in NC this year and will shatter all her PRs the longer she'll train.

Lauren Ammons will be a senior this season and has been very good for Sanderson over the last three years.  Ammons ran 5:19 last indoor season and 5:21 outdoors for the 1600.  She was 5th at the 4A Mideast region last outdoor season and has steadily been improving each year.  Ammons has individually qualified for the 4A XC State Championships individually the last two seasons.  She had a seasons best last year of 19:36 and an overall PR of 19:28 from her sophomore year.  They'll need Ammons to be as strong this season as she has the last two if not better this season.

Anna Keen will also be a senior for Sanderson this season, but only runs XC.  Last year caps off her first ever season running XC and she clocked a 20:34.  I'd assume she's a multi sport athlete for Sanderson as soccer falls during the outdoor track season.  Keen improved every race she ran last season running 22:42 in her first race, then ended the year with a PR of 20:34 at regionals.  It'll be a question of where her fitness will be, but she is Sanderson's #3 returner this season.  Allison Borter is Sanderson's #4 returner and made a lot of improvement on the track.  Borter holds a XC PR of 20:43, though ended the year with an off day at regionals.  Borter ran a big PR of 5:34 on the track and looks like she's ready for a big breakout in XC.  Mackenzie Merritt was also very strong as a freshman breaking out at the regional meet with a 90 second PR of 20:57.  Merritt ran mainly the 400 outdoors, so it may take her until near the end of XC to get back into peak fitness.

They bring in a strong freshman Kristen Clodgo who was their second girl at team camp ahead of Borter, so it seems like she'll influence their top 5 this season.  We should see how she does in a real race next weekend at the Wake County Kickoff.  She comes into high school with a solid 800 PR for an 8th grader of 2:32.  Maddie Blume, Julianna White and Evelyn Hemdinger are also potential top 5 runners for Sanderson this season if they can take the next step in their running careers.  Blume was the best on the track running 5:54 for the 1600.  Sanderson has a very good squad this year and has been a program on the rise the last few years.  They're going to be a force in the 4A East this year and very well could be a top 5 team at the NCHSAA 4A State Championships this season.