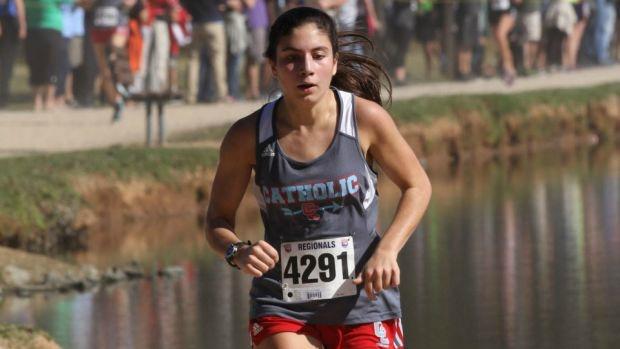 Catholic Catholic returns their full top 7 from last years team that was 7th in the 4A West.  That might not sound like a powerful squad, but they had some girls missing form their regional team.  They don't return one girl that broke 20 minutes last season, but as a team they had a really good outdoor track season.  They could end the season with their whole top 5 under 20 minutes this season if everything goes well.  They'll be lead by Emma Georges, who was their only girl to advance to the NCHSAA XC State Championships last fall.  George's had the most consistent season a coach could ask for last year with her fastest time being 20:00 and slowed 20:26.  Georges ran 5:21 on the track for 1600 meters last spring.  At the 4A XC State Championships Georges placed 50th.  With how good she's been on the track I think it's safe to assume she has a lot more potential in her on the XC course.

Megan Dest had a strong first cross country season for Charlotte Catholic last year running 20:12. Despite a somewhat up and down track season Dest ran a new PR of 5:23 indoors and 5:26 outdoors.  Now in her second XC season and second long summer of training I think Dest will expect a lot more out of herself now that she's more experienced.  Carmen Jarrell holds a PR from her freshman year of 20:20 and ran 20:28 last year.  That 20:28 came in the first race of the season and she had some ups and downs beyond that.  Jarrell ran 5:24 indoors last year and then 11:49 last year.  She narrowly missed out of qualifying for the state meet outdoors taking 5th at the 4A West region.

Ashlyn Bayadi is the real question for Charlotte Catholic's success this season.  Bayadi holds a PR of 19:26 from 2015.  In her two years of XC Bayadi did not make it to the regional meet despite being in Catholic's top 7.  Last year her final race was at Wendy's. She ran a season's best in 2016 of 20:35 proving she's still got it.  But she doesn't run track, so it's hard to tell if she's had injury the last two seasons and missed the track season, or just doesn't run track at all.  Catholic will need Bayadi back and healthy in the championship stage of the season if they want to match their true potential this season.

Looking at their returning team their is a slight gap from their 4th to 5th girl.  Kaitlyn Coleman and Meghan Little return as their 5th and 6th running 21:16 and 21:22 last season.  But looking through their track results Molly Firr has become a very strong distance running clocking 5:24 last outdoor season.  This ranked as Catholic's #2 girl on the track.  Firr also ran 1:02 and 2:26 last track season. She's never run XC before, but due to her recent break out in the distance events she might join the squad this year, which would be massive.  If they can add in Firr and keep their returning top 4 healthy throughout the season they could have a really good top 5 with one of the closest 1-5 gaps in the state. Catholic returns as the 4th best team in 3A this season, but the sky is the limit if everything comes together at the right time for these girls.