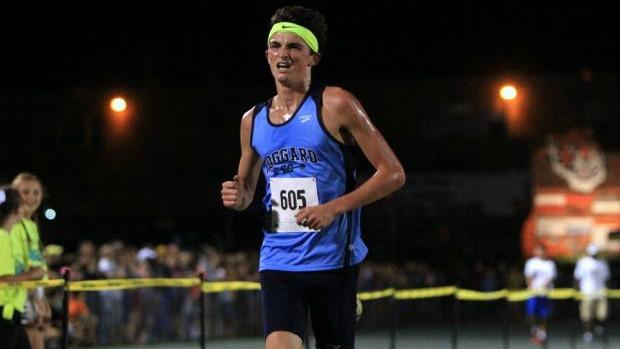 Hoggard returns a very good squad this season with a great mix of senior leaders and young talent.  Their top returner is Jamie Witmer who ran 15:53 last year and then continued to improve on the track.  Witmer ran 4:18 for a converted 1600 at the end of the season and was the 4A East Regional Champion in the event.  Witmer also took 7th overall at the NCHSAA 4A State Championships.  Witmer's a little taller than your typical cross country runner, but that hasn't seemed to stop him thus far in his career.  He was the 4A East regional XC champion running 15:55, but had an off race at the state meet the following week taking 46th place.  Off races happen and this doesn't concern me for his progression this cross country season.  His PR came from Jungle Run and that should be his first test again this season. Witmer's progression on the track from 4:35 to 4:18 shows me that his breakout on the XC doesn't meet what his full potential is coming into this season.  He should be the favorite out of the 4A East region to defend his title and will be eyeing a top 10 finish at the state meet.

Another rising senior Erik Dahlgren really peaked at the perfect time last season.  He took second behind Witmer at the 4A East Regional meet then was Hoggard's top guy at the state meet placing 16th overall.  When you factor in the realignment this makes Dahlgren the 7th overall 4A returner when you look at the state meet results.  He comes in with a PR of 16:04 and seems capable of going much faster after gaining a ton of confidence in likely exceeding his season long goals/expectations.  Dahlgren seems to be better on the XC course than the track and should be up front with Witmer this XC season.  Dahlgren also individually made the outdoor state meet running 9:53 at the regional meet. If Dahlgren can repeat this type of performance at the state meet this season Hoggard could be a big surprise when the team results come out.

Alexander Barden was Hoggard's fifth man last year as a freshman, but will come in with much higher expectations after an awesome outdoor track season.  Barden only broke 18 once in XC last year running 17:34 at regionals.  On the track Barden became a future star running 4:37.50 as a freshman narrowly missing qualifying for the outdoor state meet as an individual.  Barden seems to be a star in the making especially with the recent success of this Hoggard team.  We'll see if his track success can translate to the XC course.  Christian Talbert returns as Hoggard's #3 guy after running 17:00 last XC season, but didn't race outdoors.  Talbert went from a high 17s guy his sophomore year to 17:00 his senior year, but missing the outdoor season worries me slightly since he did run in previous years.  His fitness will likely take a while to progress throughout this XC season.

Camden Wilson and Beckett Alley will be fighting to get into the top five after being Hoggard's #6 & #7 last season running and 17:41 and 18:05 last season.  Rising Brendon Shearer also looks to be in form after running 9:43 ahead of Talbert in the App State Team Camp race a few weeks back.  Shearer was 17 seconds back of Dahlgren in the 1.X Mile race showing he might have had a big summer and could be a break out performer for Hoggard this XC season.  Shearer holds an XC PR of 18:17.  They'll also bring in a stud freshman in Brennen Pierce who ran 2:14 for 800 and 4:33 for 1500 this summer.  It's hard to indicate where Pierce will fall with this strong Hoggard team, but I think he certainly has the potential to impact their top 5.  I think this Hoggard team has the potential to do great things this cross country season and have the perfect mix of senior leaders and young talent.