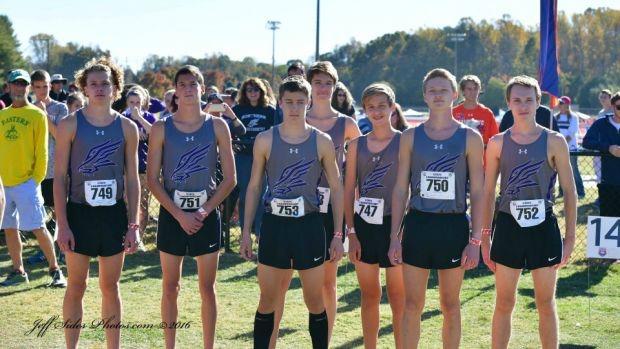 Northern Guilford returns the ultimate low stick in NXN qualifier and NBIN All-American David Melville.  Melville is the two time defending NCHSAA 3A XC State Champion, but this year will pose as his toughest challenge yet.  He and Cameron Ponder are arguably the top two returners this XC season and will square off at both the regional and state meet level bringing one of the best matchups/rivalry's to watch throughout this XC season.  Melville ran 9:14 this outdoor season and a 4:22 1600.  Melville ran 15:14 at WakeMed last XC season and also a 14:57 on the indoor track back in March.  He's a great runner when conditions are poor and a very consistent runner on the XC course, which will be huge for Northern as they return a very strong team in Melville's senior year.

Owen State's returns as a big #2 for Northern this season.  He was injured during the early stages of the season last XC season and was able to run 16:31 at the end of the season.  State's holds a PR from his sophomore season of 16:30.  State's ran 4:31 last year on the track and was 11th at the NCHSAA 3A State Championships.  State's has a lot more potential left on the XC course, and after a full summer of being healthy and getting to train with Melville should propel him to be a sub 16 guy this season.

Riley Redmon and Benny Melville return as Northern's 3/4 with similar PRs of 17:23 and 17:22.  Redmon doesn't run outdoor track, so it'll be a little questionable of how good of shape he will be coming into the season.  But that didn't stop him last year running a PR of 17:23.  Redmon was 81st at the NCHSAA State Championships, and I'm sure Northern will expect a lot more out of him at the end of this season.  Benny Melville comes off of his best Outdoor season yet running 4:39 and 10:15.  His 17:22 last year was over 40 seconds faster than he was as a freshman.  If Benny has similar determination to older brother David I only expect him to get faster and faster as time goes on.

Brett Thomas returns as Northern's #5 after running 17:39 last season.  That was a big PR from him and only one of two times he's broken 18.  Thomas ran 2:07 and 4:47 on the track last season setting new PRs in both the 800 and 1600.  They'll need Thomas to be a consistant sub 18 guy this season.  It does seem like they'll bring in a stud freshman as well in Jack Dingman from Northern Guilford MS.  Dingman was the Guilford County MS Champion in the 1600 running 4:57.37, and assuming he will attend Northern HS he should certainly be a factor in their top 7.  They have some depth in Ethan Chaplin and Zach Booker, who were both in the top 7 last year and ran sub 18.  Northern certainly returns a strong squad, but they'll need a few guys to step up if they want chance to be one of the top 3A programs this XC season.