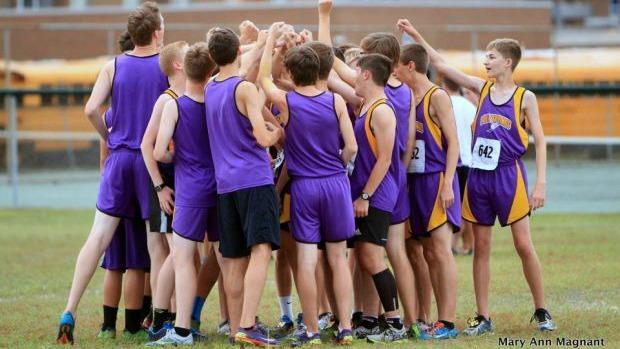 Holly Springs has developed into a very strong cross country program over the last few years, but have struggled to strike glory as a team due to a lot of tough competition in the Raleigh area surrounding them.  Holly Springs will lose their top 2 runners in Gavin Kinkead and Bradley Howard, but return 7 boys that have broken 18 and bring in a big transfer in Tyler Dollhausen, who has moved to Holly Springs from Northport, NY.  Dollhausen comes into Holly Springs with PRs on the track of 1:55 and 4:26.  But he has ever put a focus on XC.  He comes in with a PR of 18:08.  It's a question to if Dollhausen will actually focus on XC and how good he will be as a track focused runner.  Dollhausen did run 14:03 for 4K at Van Cortlandt Park last season winning his section, so I think he will certainly impact the top 7 this year for Holly Springs.  He could be the top guy, could be the 7th and anywhere in between, but only time will tell.

Rising senior Sam Young returns as Holly Springs #1 guy with a XC PR of 16:39.  Young ran PRs of the track of 10:02 for 3200m and 4:48.  He ended his season running 16:42 at the Mideast regional placing 30th overall.  Young certainly seems like he favors the longer distance, and will be excited to step up as a leader for Holly Springs this season.  Jevon Neal is another rising senior who looks to contend as the top runner for Holly Springs this fall.  Neal ran 2:02 and 4:37 on the track this spring.  His 1600 improvement and tremendous as he had only ran 4:55 a year ago.  Neal has improved drastically over his high school career as when he started he wasn't a sub 20 runner.  Neal should be highly motivated to keep improving and want to help bring Holly Springs as a team to the state meet.

Holly Springs has a lot of guys that look to contend for a top 5 spot this year, but based off last years XC results Jaden Morrow, Ryan O'Hare and Garrett Hageman return as strong candidates.  Morrow was Holly Spring's #5 guy last year running 17:09.  He is more of an 800 focused guy on the track, but has been consistent at the end of the season for Holly Springs over the last two years.  Rising junior O'Hare is coming off his best track season yet running 4:43 and 10:12.  His XC PR comes from his freshman year where he ran 17:23, but a strong track season indicates that he will be in better form this year.

With Hageman, Brandon Duke, Jordan Bliss, Jackson McIntyre, Adam Kanning, Dexter Hill and many more still on Holly Springs roster I think they have plenty of runners with the potential to fill the gaps of their top 5.  They'll certainly miss having Kinkead up front as he was a reliable #1 for Holly Springs last year.  Last season they were 7th in the Mideast and battled the same illness that plague the Broughton team throughout the majority of the season.  It's hard to tell if it was hitting them as hard as it was hitting Broughton in the middle of the season, but this made me thing that they certainly had a few runners that underperformed last season.  A major key to Holly Springs success is if they can get transfer Dollhausen to have success on the cross country course.  If he can come in an run as their top guy they'll be a force in the Mideast this season.