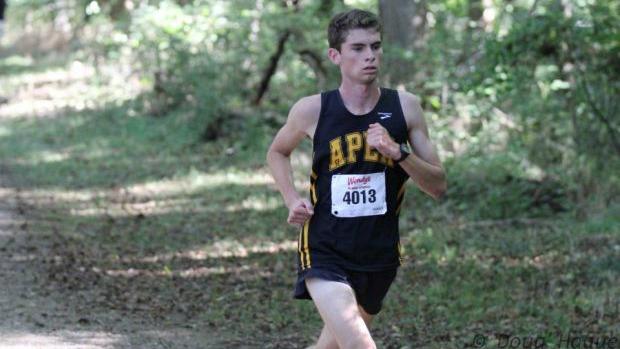 Apex takes a big hit losing Ben Savino, who was 4th place at the last two NCHSAA 4A State Championships and is likely irreplaceable for this squad.  They did see some excellence from rising senior David Cart who kicked the season off with a big 3rd place finish at Friday Night Lights, and went on to hold a seasons best of 15:42 at the regional.  Despite being one of the top athletes in the state Cart took 51st at the NCHSAA State Championship.  Cart seems to be a better XC runner than a track runner with PRs of 4:35 and 9:47 last season.  But if Apex is going to have team success this season and make it out of the tough Mideast region, they'll need Cart to be on his A-game at the end of the season.

Apex's will likely have a large gap back to their #2 guy from their #1 Cart, but have great depth beyond that.  Nick Gavazzi and Jacob Vehslage return as their #2 and #3.  Garvazzi had his best day at the regional meet where he went form a 17:33 PR down to 16:57.  On that track he had PRs of 4:52 and 10:39, which based off that he wouldn't be in Apex's top 5.  Vehslage is a rising junior with PRs of 17:03 in XC, and 4:42 on the track.  Vehslage improved steadily over the season starting off running 18:28, then working his way into the top 5 over the course of the season.

Rising sophomore Scott Kennedy had strong freshman track season and ran 4:45 in early March, which at the time was one of the fastest marks for a freshman.  He focused on the 800 running 2:03 at his conference meet.  Last year in cross Kennedy started out in their top 5, but feel out of it towards the end of the season.  He ran a PR of 17:42, and based off his track success I think he could be a strong runner for Apex this season.  Austin Dewey will return as a top 7 runner from last season.  He worked his way onto the squad towards the end of the season and set a big PR of 17:16 at the conference meet.  He ran 4:50 on the track and will likely be in a similar role as he was last season.  There are plenty of teammates with PRs similar to Dewey that will cause them to be battling to be in the top 7.

Apex has plenty of other options that can factor into their top 7 this fall in Andrew Edney, Liam Laughner, A.J. Thornton, Anthony Battle and Bobby Gunshefski.  With nothing set in stone as to who is in the top 7, some team competition will certainly bring out the best in these athletes in training and on race day.  Apex always fields a strong team, but with the Mideast region being so tough again they're going to need a few guys to have some break out performances.  Last year despite placing 1st and 4th in the event, and most of their guys running PRs they were still the 6th place team by 8 points.  The region does lose Broughton, but adds Cardinal Gibbons, so nothing really gets any easier.  Apex certainly has all the opportunity in the world to make the state championship, but its going to be a fight from 7 schools for what looks to be 3 spots behind Green Hope.