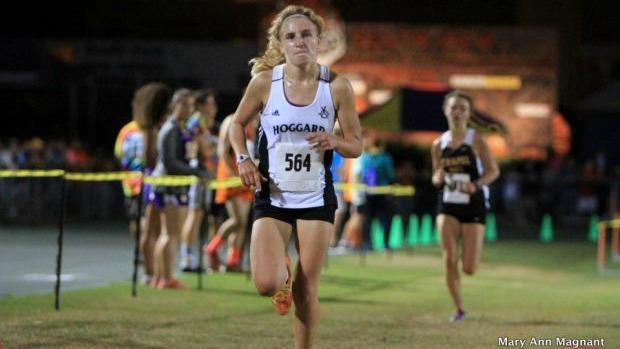 Watch Jenna Pellizzari take 2nd in the NCHSAA 4A East 1600

Last season Hoggard girls advanced to the NCHSAA 4A State Championship after placing 4th at the 4A East regional without top girl Jenna Pellizzari.  I believe they unfortunately had a uniform issue and without having ample time to fix the situation they were DQed and ran the race anyways.  But they aren't included in the results.  But they lose no one from that team and will add back sophomore Pellizzari.  Pellizzari proved to be a star on the track clocking 5:11 in the 1600 and also taking 6th at the NCHSAA State Championships as a freshman.  She holds an XC PR of 19:32 from the Jungle Run, but her season ended extremely early last year with her last race being Sept. 10th.  We certainly haven't seen close to her best in XC and she has the possibility of being one of the top girls in 4A this season.

After Pellizzari went down last season Lilli Johnson was their top girl.  Johnson only runs cross country and set a PR of 20:09 last season at her conference meet.  The year prior she was a high 20s runner, so cut off significant time.  They'll certainly hope to have Johnson rejoin the team in good shape this season.  Rising junior Skyler Burke had a great cross country and track season last year getting down to 20:13 for 5K and running 5:38 on the track.  She was 5th in the 1600 at the 4A East Regional narrowly missing the state championship.  Burke was slightly inconsistent last season, after running her PR of 20:13 she ran 21:36 at the regional.  Hoggard looks to be a strong team, but with the 4A East being a lot tougher than last season they'll need her on her A-game to ensure they return to the state championships.

Katie Witmer and Elaina Lanphear return as Hoggard 4 and 5 this season with PRs of 21:00 and 21:38.  Witmer only had one cross country season under her belt and did not run track her freshman year of high school.  Lanphear, a rising junior had a PR of 5:54 on the track last season, and her 21:38 is a lot more impressive when you consider she only ran 25:38 the year prior.  A 4 minute improvement is massive and she could only improve the more that she continues running.

Kate Redenbaugh was Hoggards #6 last year, and looks to be in great shape finishing as Hoggard top girl at ASU Team Camp #2 last week.  They didn't have a fun squad and it's hard to tell what her 11:36 time means on a 1.X mile course.  But she was 19th overall, so it seems pretty solid for someone who wasn't in the top 5 last season.  Redenbaugh was good on the track holding PRs of 5:57 and 12:18.  They'll add freshman Sloane Fleming-Hickey to the squad as well who wasn't too far behind Rederbaugh at 11:51 at camp.  With the breakout season that seems to be ahead for Pellizzari developing into a low stick for Hoggard I think they'll be a tough squad to go against this season.  They rank 5th in the 4A East,  but would be the top team in the 4A East prior to the realignment.  But the top 5 teams are so close together the region is anyones for the taking.