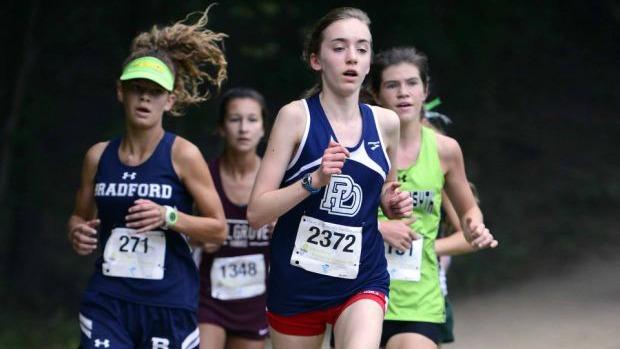 Providence Day girls are back with a strong team heading into the fall cross country season.  A year ago, they took a narrow 3rd place at the NCISAA 3A State Championships to CISAA rival Charlotte Latin.  They'll only lose #2 girl Molly Kral from that squad and will be led by star rising junior Justine Cronk.  Cronk was great for PDS as a sophomore consistently scoring as their top runner and ending the year with a PR of 19:06. Cronk continued that success on the track running 5:18 for 1600 and 11:37.91 for 3200.  She will be expected to lead the Chargers this season and also will be one of the top returners in the NCISAA 3A.

Ananyaa Bharadwaj had a big sophomore track season and will certainly have much higher expectations heading into XC. She got her 1600 time down to 5:22 taking 5th overall at the NCISAA 3A State Championships.  She was able to double back from the 1600 to take 7th in the 800 the same day clocking 2:27.72.  Her confidence is going to be much higher knowing that she can contend with the best girls out there.  Justine Cronk's older sister Regan will be one of the senior leaders for this girl's program returning as their #2 girl. Regan Cronk holds a PR from last year of 20:10.09 and on the track was just off of Bharadwaj at the NCISAA 3A State Championships also running 5:22.  Regan Cronk ended her season on Sept. 28th last season only running 4 races, so I'm sure PDS will be excited to have her back this season.

Providence Day's gap back to their 4th and 5th runner will be their big issue heading into the season with two girls Aliese White, Dayna Asher having PRs in the low 21 minute range.  Both White and Asher brought home PRs from a tougher Hagan Stone course at the NCISAA 3A State Championships running 21:09 and 21:38 placing 33rd and 37th overall.  White did not run track for PDS last fall while Asher did, but there were many girls that had a better season then her on the roster.  She ranked as the 11th 1600 runner on the team with a season best of 6:30.14.  This shows that there are going to be a lot of girls battling for a top 7 spot at the end of the year.

Rising senior Caroline Ortiz had a good track season showing that she'll be in the mix to score for the Chargers.  Ortiz had a seasons best time in XC last season of 22:24.00 rankings as the 10th best runner on the team.  Ortiz got her 1600 time down to 5:58 and ran 2:33 for 800 meters.  Tracey Laughlin also showed some promise in the 800 where she was their 4th overall girl running 2:34.18.  Laughlin holds a XC season best from a year ago of 22:16.  Having a strong freshman come in, or an athlete breaking out will be huge for PDS in the NCISAA 3A Team Battle.  Cary Academy will once again be strong, but realistically PDS isn't as far back from them as it might seem.  They also are coming off a year where the girls lost their CISAA Conference Championship streak to Charlotte Latin, which will certainly fuel Coach Ben Hovis and these girls to step their game up for the 2017 season.

*Note: There is a strong freshman likely heading up from the middle school program in Niamh Waterman, she'd certainly impact the top 7.