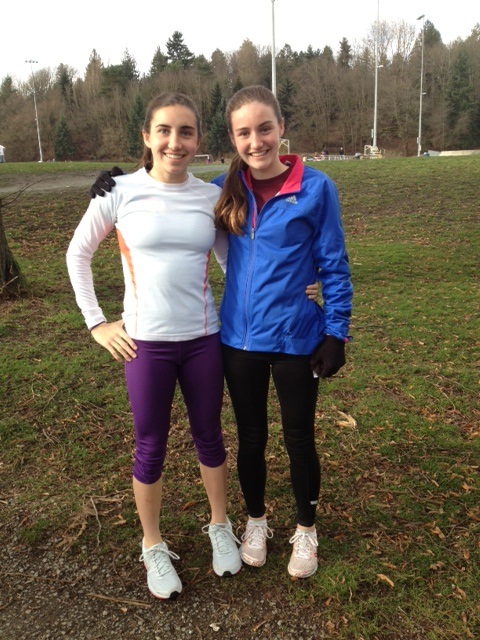 Wesley Frazier always matches up well against national competition, but sister Ryen is a bit of a wild card in the two mile.

First, a brief discussion about how invitations are given out for a meet like this one (disclaimer: I was not involved in the invitation process in any way).  You might look at the current indoor rankings and wonder why many of the athletes that were invited to the meet don't show up in the rankings (or, conversely, why many of the athletes in the rankings were not invited).  A meet like the Brooks PR Invitational is planned months in advance, and many of the Golden Tickets were sent in November and December (keep in mind that indoor season doesn't start until January in some states).  Complicating matters further is the uneven nature of indoor track in general: many states don't have an official season, and even in the ones that do there are always athletes and schools that do not participate.  Finally, you must realize that Pennsylvania and Virginia have their state meets today, while New York is in the midst of sectionals, and so athletes from those states are otherwise occupied.  Considering all those factors, the best information that meet management had to work with came from the 2012 outdoor and cross country seasons; when you look at those rankings, the invitation lists become much clearer.

And now, let's look at the four events in which North Carolina athletes are competing, and see how our home-grown stars stack up against the national talent in the field!

Isaiah Moore (Cummings) is part of a nine-man field for this event, with 6 guys advancing to the final.  The hurdles add yet another wrinkle to any statistical analysis: some states compete in the 55 Hurdles, and some in the 60 Hurdles (for the unaware, the hurdle spacing is the same, but the 60 has a longer sprint to the finish).  Here are the guys in the race that are high in the current 2013 rankings for this event:

That would lead you to believe that we will have a three-man race, and that Isaiah is facing a tough challenge.  If you look at the 55 Hurdles, things shake out like this:

In this look, it seems that Isaiah will be right in the thick of things (a difference of 0.05 is easily overcome, but a difference of 0.26 is pretty hefty in such a short race).  Of course, neither of those current rankings have even a majority of the athletes in the race.  To get that, you have to go back to last spring's 110 Hurdles rankings:

Do you favor current rankings that may be missing several of the participating athletes, or 2012 rankings that do not reflect the athletes' current state of fitness (not to mention offseason training and/or injury status)?

FINAL ANALYSIS: If Allen is in shape, he is the class of the field, and Moore ranks somewhere right in the middle of the field.  That means he needs to have a clean run in the prelims, and making the finals sould be the main goal.  If he gets there, I wouldn't be surprised to see him finish as high as third or fourth with a good race.

Mollie Williams (Clayton) will also square off against 8 other competitors for a berth in the final, and many of the same arguments made for the boys' race still apply here.  However, the current 60H rankings are a bit clearer in this event, as the top three in the country are in Seattle right now:

This gives the impression that Mollie will be facing quite an uphill battle.  In this case, the 55 Hurdles list doesn't help much, as only two of the entrants in the Brooks PR race have a time in that race.  That leaves us with a look at last spring's 100 Hurdles ranking, which brings a startling revelation:

That's right: the top 8 returning 100 Hurdlers from last spring are all in the race!  Also, if you were wondering why Mollie got an invitation over the other North Carolina hurdlers that have very similar times this winter, you've got your answer above.

Final Analysis: Any way you slice it, this looks like a spectacular three-girl race up front.  Mollie has her hands full just getting to the finals, especially given her history of not getting into her absolute best shape until late in the spring season.

There isn't really even a reason to look at the current indoor rankings: you won't find any of the competitors in the top 50 right now, and it's actually Bakri Abushouk (Cary) that has the fastest current time.  That's terribly misleading, though, as most of the field runs a limited indoor schedule, and the ones who have raced have run the mile.  Even Abushouk's current time might undersell him a bit, as he has yet to be in a race where he was both fresh and pushed to his limit by the other runners.  To get a good picture of the quality of this field, you have to start with times from the fall:

Starting to get a feel for the talent level?  Of course, 5K courses can vary wildly around the country, and minor injuries (since healed) could have limited the production of some of the athletes in this race.  Let's take a look at the final rankings for the 3200/two-mile from the 2012 outdoor season to see if there is any more information to be gleaned:

OK, that's 8 of the top 15 returning two-milers in the country, all in one race.  We should also note that Leingang and Gardner are the only two returners in the field, so they have an edge when it comes to experience on this track.

Final Analysis: there are a lot of big names in this field, but in distance running that doesn't necessarily mean much at this point in the year.  Some of the athletes may not be in great race shape right now (especially if they have been emphasizing base training all winter), and we have no idea of most of the guys' current two-mile fitness.  Abushouk has better footspeed than many in the field (he has the top mile time this winter), and he is certainly been racing very well.  If he can hang with the lead pack through the middle of the race he could be a sleeper candidate for a top-three finish.  I think it's reasonable to say he can go under 9:10, which should keep him in the top half of this race.

In contrast to some of the other events above, a few of the athletes in this one have put up some impressive times during the indoor season.  Using the current rankings, you can see that Wesley and Ryen Frazier (Ravenscroft) match up very well, and would seem to be contenders:

Still, with only a handful of times, it is useful to look at a wider range of times and athletes, and so let's see where some of the runners in this field were ranked at the end of this past cross country season:

Using that set of times, the Fraziers don't look as good.  However, Wesley runs a very limited fall schedule, and Ryen did not race at all during cross country.  Given that information, it might be more informative to look at 3200 times from last spring:

Once again, the danger with using last spring's times is the unknown in the last nine months that could have inhibited a runner's progress.

Final Analysis: Wesley is a strong contender to win the race, and Ryen might surprise some people around the country by finishing in the top 5.