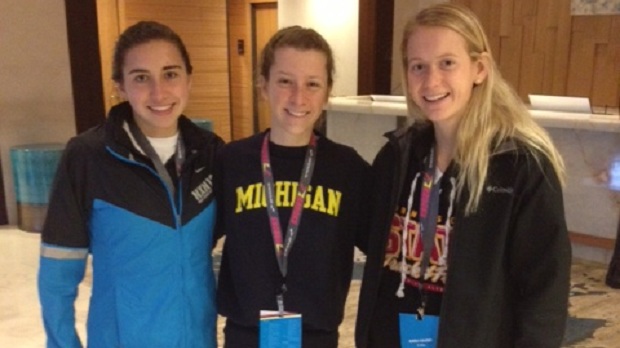 Coach Mike Miragliuolo of Green Hope is sending us periodic updates from Seattle, where he is helping chaperone the athletes competing in the Brooks PR Invitational.  He is assigned to the boys' 3200 runners, but has had a few chances to interact with other runners, as well.  Today, he has broken up his report into two parts, and the first details race-day conversations he has had with some of the 3200 runners.  He will send a final installment tonight, which will be part of our recap.

Race day extras This morning I had the chance to interview several athletes as they prepare for their races: Mollie Williams (Clayton):  When asked if she was nervous: "Yes, I am a bit. I know I am the underdog. I have to have a good start since that is my weakness. Once I get going I have speed, but I am worried about my start." Race day plans: "I plan to stretch a lot and run a little on the treadmill. My Mom is here so I will hang out with her a little and relax." Ryen Frazier (Ravenscroft): What has been the best part of the trip? "I liked the duck boat tour, but the best part has been hanging out with all the other runners. It's cool because they are all going through the same thing and thy can relate with you. It's nice when others you talk to know what a tempo run is or other things you talk about. It's also neat to hear all their stories and about all the places they come from." Wesley Frazier (Ravenscroft): Wesley has been to many of these so she sort of knows the routine. I spoke with her and Erin Finn (Michigan signee) and Maria Hauger (UVA). Erin and Wesley said they have gone back and forth over the years and expect a tight battle today. They expect the race to be fast right from the start and all three said it is not about pacing, but just sticking with the front pack and pushing hard as the race nears its conclusion. All three, in fact, said they wear a watch, but will never turn it on. It's all about feel and the other competitors today. When I asked about wanting to beat the others all of them agreed it was not about that today, but trying to run your best. Estevan De La Rosa (Arcadia High School): Estevan is a runner for Arcadia, the number one men's cross country team in the nation the last few years. He is a quiet junior, but an excellent runner. When I asked about strategy:  "I have no really done the two mile in a long time so I'm not sure what to expect. I will try to stick with the lead pack the best I can."  When asked about the best part of the trip he had a similar answer to Ryen: "Hanging out in the hotel. I love it. I have met lots of great athletes and the whole experience has been fun." When I asked him what he would do waiting for the race: "I'll just take a nap and relax at the hotel. I never do a run on race day so I will just do a lot of warming up at the track." Blake Haney (Stockdale High School):  another junior, Blake is an exceptionally nice young man. He said he wasn't worried about trying to impress college coaches, but just wanted to race well. When asked about strategy:  "I have a pretty good kick so I am hoping to hang with the lead pack to try to give myself a shot to win at the end." Blake should be in the mix for the win, but when asked about other competitors he said it's hard to say because you don't know where everyone is in their training. He did name Bernie Montoya as a runner who should be right there at the end.