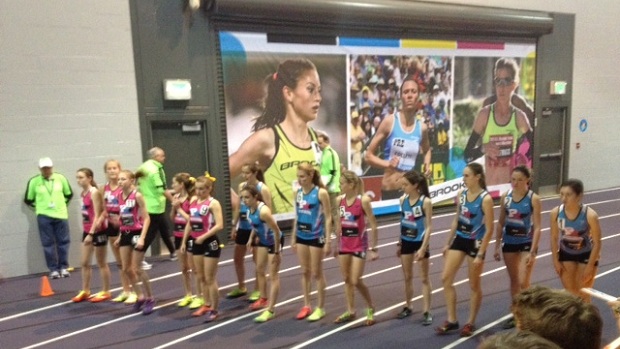 After a fun weekend and a long day of anticipation, the girls' 3200 runners toe the line at UW's Dempsey Indoor facility.

This is the final installment of Coach Mike Miragliuolo's diary from Seattle, where he has been acting as coach for the boys 3200 runners in the Brooks PR Invitational.

So the routine for breakfast on Sunday was the same as Saturday. Coaches walked runners over to the same restaurant and had another good meal.  I did see that one of the boys in my group had a nasty cut on his leg this morning. From what? Well being out of touch (I know, really out of touch) with pop culture, I had never heard of the Harlem Shake until yesterday. The kids did it on our duck boat and then about half of all the athletes did it last night in the game room and this kid broke through a ping pong table doing it! Slight limp, but he says he will be good to go. Anyway, the morning probably dragged on and on for the athletes as lunch was served in the hotel around noon and runners finally met up with their event coach at 1:45 to finally head over to the University of Washington for the meet.      Even the trip over was high class. Seattle provided a full-fledged police escort. They stopped highway traffic for the 4 motor coaches and had around 10 police motorcycles and a few cars escorting us to the University.  The Dempsey facility at the University of Washington is a great facility. It has 5 lanes that go all the way around the track that surround a full 100 yd artificial turf football field. The athletes and coaches had the field for drills, warm-ups, and stretching while the spectators were fenced off. I'm not sure how many fans were present, possibly 1500 or so. They turned the lights down over the infield and kept only the track lit up during the races.      It was an intense atmosphere, although not especially loud during the races. The finish of the boys 2 mile may have been the most interesting with Bernie Montoya (Arizona State recruit) edging out Jacob Thomson (NC State). The boys 3200 race leaders went out in a relatively easy 4:38 (Montoya around 4:41), but the top two closed in 4:13. Pretty impressive when considering the boys 1 mile winner won in 4:08. It was a strategic race and there was a lot of jostling back and forth. several runners were spiked and a couple got bandaged up after the race. Bakri made a move up to 2nd at one point and finished in the top ten with a strong performance.      Isaiah Moore was excited after his 3rd place finish, especially after he stumbled out of the blocks. Mollie also seemed pleased with her performance. Wesley is probably a little disappointed, but her friend Erin had a very strong race to lead a fast field. Ryen also ran well, but as she is only a sophomore the whole experience should be a good learning one for her.      After the race we were hustled back to the hotel and runners were given a short time to shower and get ready for dinner.  Dinner was amazing as we ate on the top floor of the Columbia building, the tallest building on the west coast. Athletes got to spend 2 hours after dinner dancing, playing games, and singing karaoke. It was a late night with a near midnight bedtime, but a fun way to end the weekend.     I will be getting on the 4:00am bus to the airport for a long day of travel back to North Carolina, but what an amazing weekend for all the athletes and coaches. We were all treated royally and all made some life long friendships. Thanks to Brooks for such an incredible experience.