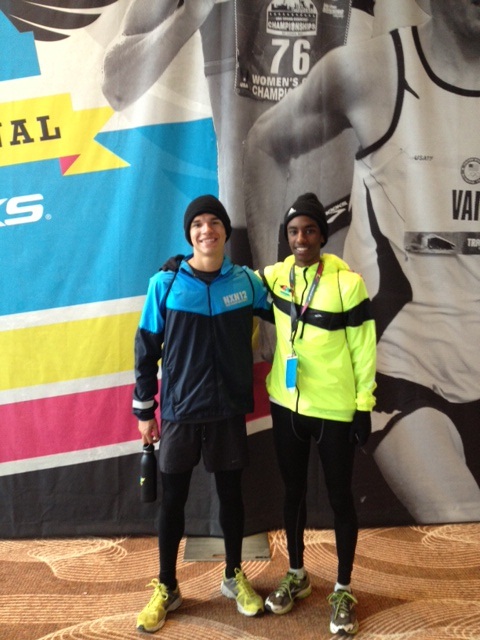 As luck would have it, Mike Miragliuolo will provide us with behind-the-scenes photos like this one all weekend.

Coach Mike Miragliuolo of Green Hope is in Seattle this weekend for the Brooks PR Invitational, and he has been kind enough to send back some of his observations (and hopefully some behind-the-scenes photos, too).  He is a part of the Brooks ID program, and the company invites coaches from the program to supervise athletes in one of the events for the weekend.  Mike will be coaching the boys' 3200 runners, a group that includes Cary's Bakri Abushouk.  Here is the first installment of his diary:

Brooks has been stepping up its game in terms of its involvement with high school runners. The company has created a great event in Seattle where they fly out some of the nation's best high school runners and coaches to participate in the PR Invitational. After having to turn down an invitation to come out in 2012, I was fortunate enough to be asked again in 2013 and accepted their offer. I was the last of 12 high school coaches to arrive in Seattle late Thursday night and it was apparent immediately that this would be a great event for all involved.
Coaches, athletes, and several Brooks professionals were put up in a very nice hotel in the heart of downtown. All were given some cool gear and the competitors began arriving throughout the day Friday. I am proud to be representing Green Hope High School and all of our great athletes and coaches out here and I am so excited to have 5 North Carolina athletes out here as well. I have followed Bakri and Wesley's careers the closest because they have been outstanding performers in distance running for four years. I have been especially thrilled to see the way Bakri's senior year has gone as he has been such a hard worker, is an amazing young man, and comes from a great family. I know Coach Jerry Dotson must be so proud of him. Living in Cary myself, it seems as though hardly a week goes by without me driving by Bakri as he runs alone in all weather conditions putting in so much extra work.
Anyway, the twelve coaches and the Brooks pros took turns going to the airport to help the runners get to the hotel, and many went out to Green Lake Park to get a run in. The athletes got their gear, had some time to meet the other athletes in the game room, had lunch and then met their race group before heading off to a Mexican dinner high up in Seattle's Space Needle. I had the chance to talk to Mollie Williams, Ryen Frazier, and Bakri Abushouk for a bit, although it was a pretty hectic first day. Bakri's cousin from Georgia, Adel Yoonis (Ole Miss recruit), is at the event as well. My group, the 2 mile boys, is a loaded field with some of the best distance runners in the US. It was neat because Bakri got to talk to fellow NC State recruit Jacob Thomson and UNC recruit Joe Sansone on the way to dinner.
After a welcome from the Brooks people and dinner and dessert in the Space Needle, the athletes got to spend two hours in the hotel enjoying the game room and relaxing. As I type there are two boys doing drills in the hallway outside my room. One of the things I notice out here is these runners are the best in the country for a reason. They are driven and competitive, but they do the little things. They want to run, they want to eat right, they want to do their drills and stretching, but they also manage to still have a good time.
So that is all for day 1. Morning run and some fun tomorrow. Hopefully I will be able to catch up with Wesley and Isaiah as well.