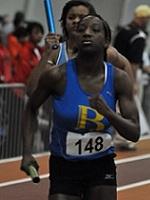 Region IV's Top Returnees for 2013 Outdoor Season...
A list of the top returning individuals in each event among Region IV schools from last year&#39;s outdoor season and links to full returnees rankings lists in each event. Cave Spring juni...
Bulldog Invitational Coverage...
At the Bulldog Invitational this past Saturday at Liberty University, only fully automatic timing and a finish line camera could be able to determine the winner in the girls 55 meter dash ...
Liberty Elite Meet Summary...
Hidden Valley senior Carolyn Bethel opened her indoor season in epic style with two monster PR&#39;s in a distance double of a 4:53.56 1600 and 2:52.46 1000. Her 1600 time is a US leader, while the 10...
Top 50 Girls Indoor Returnees for 2012-2013...
Foot Locker All-American Sophie Chase of Lake Braddock will return next year for indoors with the fastest times from this past season at 1600 (4:52.43) and 3200 (10:29.66) meters as well a...
Group AA Regional Rankings...
Links to virtual meet & event rankings for each region in Group AA....
Group AA Girls Indoor T&F Top Returnees...
A top 25 list of returning Group AA girls athletes by event from last year&#39;s indoor track season. The Blacksburg girls will be tough to beat in Group AA with their big three in short ...
Athlete Spotlight: Alyn Carr...
Known by her peers and coaches for her humble and friendly attitude, Blacksburg’s Alyn Carr has emerged as one of Virginia’s top sprinters this indoor season. Despite just being a sophomore, she h...