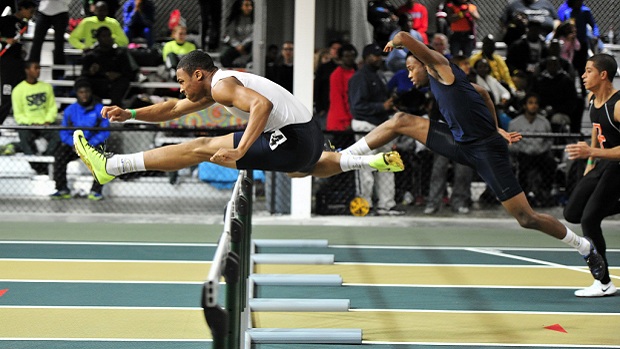 Two events, two US #1 marks.  It was a good day for Cummings' Isaiah Moore at the JDL High School Kickoff Classic.

The first meet of the first full season at the JDL was filled with strong early performances, including five that currently rank first in the nation (although we are only two weekends into the season, and several states don't start until January, so that doesn't mean too much yet).  Isaiah Moore (Cummings) brought home two wins and two US #1 rankings, running 7.43 in the 55 Hurdles and jumping 23' 3" in the long jump.  Alyiah Riley (High Point Central) also claimed the top spot in the national rankings by winning the girls' hurdles in 8.31.  Myles Lazarou (Northern Guilford, competing unattached) cleared a nation-leading 6' 6" in the high jump, while Knightdale's boys ran a US #1 of 3:27.65 in the 4x400.  Finally, James Drummond (Lexington, unattached) ran 6.45 in the 55 dash, which is currently the top performance in the country.

Though they don't lead the country, Sydnei Murphy (Apex, running unattached) and Paisley Simmons (TW Andrews, also unattached) ran fast times of 7.16 and 7.25, respectively, in the 55 dash.  There was a great battle in the finals of the girls' shot put, during which Breanna Warren (Western Guilford) and Hailey Cook (Hendersonville) one-upped each other several times; Warren came out on top with a US #2 throw of 42' 4" to beat Cook's US #3 of 41' 10.75".  Brooke Shelton (Ledford, unattached) and Rayna Yvars (Green Hope) also had a great duel in the vault, with both girls clearing 11' solidly before both lost their rhythm on the next height.  Jon Beyle (East Chapel Hill) threw a PR of 56' 7.5" in the boys' shot put, earning him a US #3 ranking, while Colin Minor (South Brunswick) also managed an all-time best of 53' 7.75".  James Drummond (Lexington, unattached) ran 6.45 in the 55 dash for US #2, showing that he is back healthy from his nightmare of a junior year.

It would be a shame if we failed to mention two of the out-of-state athletes that attended the meet, as their performances were top-notch.  Zach Taylor (Northwestern SC) ran 6.46 in the 55 dash (US # and 35.69 in the 300 (US #3).  Tray Oates (Allatoona GA) cleared 15' 7" in his first vault competition of the season, which puts him at US #3; Ethan Smith (Cedar Ridge) went 14' 6" in the same event to rank fourth in the nation at this point.