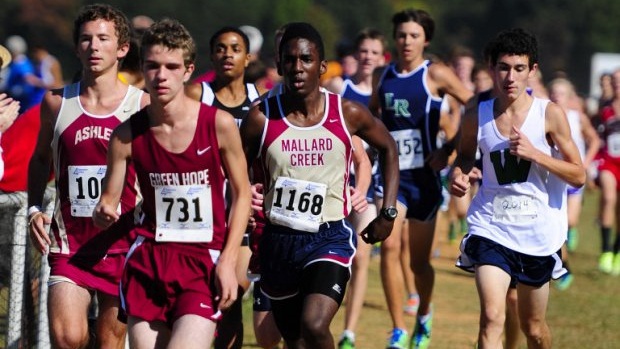 This could be a very interesting team battle, if both Green Hope and Cardinal Gibbons are healthy and racing everybody.  Based on this season's times, the two teams grade out exactly even in the virtual meet for this race.  Ardrey Kell isn't very far behind, and they are looking to put everything together as they go into the postseason.  After those three, there is a solid drop-off to the next group of schools, which should also be very competitive: Leesville Road, Jay M. Robinson, Cuthbertson, and Pinecrest all score within 7 points of each other in the virtual meet!

Eliza Dekker is the favorite in this race, and she is the defending champion.  With the change in the weather, there is a chance the course record of 17:27 could be in jeopardy.  Sydney Foreman (Ardrey Kell) and Mary Grace Doggett (Cardinal Gibbons) will go head-to-head for the fourth and possibly final time this season, with Foreman holding a 2-1 edge so far.  Doggett and her teammates (including Sophie Ebihara) haven't raced for two weekends, and could be fresh and ready to fly.  Likewise for Maura McDonnell (Green Hope) and Malia Ellington (Community School of Davidson), and that should be a very fun lead pack to watch.  Natalie Andrejchak (Robinson) and Chandler Borton (RJ Reynolds) should have a nice battle as they fight for a chance at a top 5 spot, while Victoria Hutchens (Patrick County VA) ran 18:40 last fall.  Sydney Teague (Ardrey Kell) rounds out the list of girls in this field that have been under 19 minutes this year, while Jennifer Stephenson (Village Christian) is a likely candidate to break that barrier for the first time on Saturday.  Also, keep an eye on Rebekah Greengrass (Panther Creek) to see her progress back from her struggles this season (injury over the summer?); her only recent result was in the rain and mud at the Greensboro Invitational.

If they are at full strength, the Broughton boys are favorites in any race they run (how's that for a tip-off to the All-Classes Rankings this weekend?).  However, they are not running William Roberson or Allen Lawrence, and that should bring them back to the pack a bit.  Mount Tabor would be the team best positioned to capitalize on that, but the Spartans are also not a full strength; without Dalton Nickel and Ian Milder, they are looking to solidify their depth and build some confidence there for a run into the postseason.  Instead, it could be Cardinal Gibbons that comes closest to the Caps, and they should have a lock on second place if they don't.  RJ Reynolds will have their young runners in the Frosh-Soph race, and that could mean Lake Norman and Ardrey Kell will have good shots at the top 5, with Leesville Road also in the hunt.

Patrick Sheehan (Lake Norman) had a great run last weekend at Wendy's, and he is a slight favorite for the win here.  John Dalton Rohr, Asher Smith-Rose, and Jeremy Brown, all Broughton teammates, will be right there to push him.  AJ Tucker (Cedar Ridge) has not broken 16 minutes yet this year, but he has the potential to get right in the mix at the front of this race.  Likewise, we are still waiting for that breakout race from CJ Buck (Robinson), who definitely has sub-16 potential.  Along with Tucker and Buck, the second pack should include Nick Tyrey (Cardinal Gibbons), McCann Sheridan (Robinson), Dustin Sneed (RJ Reynolds), and Andrew Krivsky (Mount Tabor).  Keep an eye on a few kids from the mountains, as those schools in the southwest part of the state have a history of running well at this course: Zach Boone (Mitchell), Dylan Johnson (Hayesville), and Frank Cline (Robbinsville).  Finally, Caleb Smith (Patrick County VA) could be a factor; he ran 16:07 last fall, but only has one result in the database this year (from over a month ago).

Depending on how hard they run, Providence could be big favorites in this race; if the Panthers save their legs a bit, that could open the door for other teams to take the team title.  Marvin Ridge is in the best position to capitalize, but there are two other teams close behind them.  It will be interesting to see how defending NCISAA 3A champions Ravesncroft fit into the picture here; there is a very good chance they could win the race in the right scenario.  Likewise for Weddington, a team that seems to be rounding into shape as the postseason approaches.  Expect Lake Norman Charter to contend for the top 5, as well.

Providence has the only three girls in the race that have broken 19 minutes (Bianca Bishop, Grace Sullivan, and Kayla Glova); however, don't be surprised to see those three running in step with their 4-7 runners, a bit farther back in the field.  Mallary Price (Weddington) should have a great shot at breaking 19 minutes in the cool weather, and she could be the race winner when all is said and done.  The second pack could include Hana Ratcliffe (Durham School of the Arts), Morgan Garrett (Weddington), Melanie Hussey (Marvin Ridge), Gina Daniel (Providence), Maddy Ringenbach (Ravenscroft), and Karly Kreber (Bishop McGuinness), but there will be some teams holding runners out at the conference meets approach.

This will be difficult to predict; there are some teams in this race that are stepping down from the championship level to save their legs just a bit for their conference meets, and even a few that are running their second seven.  If everyone was at full strength and running hard, though, Weddington is the favorite, and would be hard to beat in this race.  Providence, Marving Ridge, and Green Hope all have strong teams, but how they end up racing on Saturday remains to be seen (expect lots of pack running a little further back in the race than you would normally expect them).  East Rowan is strong enough to move into the top 3 if they put their full team in the race, but the Frosh/Soph race might steal a few individuals out of this one.

The Invitational race is the hardest to predict, because many teams hold out runners or run at tempo pace.  Wyatt Maxey (Providence) would run away with this race if turned loose, as his season best is almost 30 seconds faster than anyone else in the race..  Candidates for the individual medals include Tom Nobles (Green Hope), Weddington teammates Matt Burns and Tanner Glackin, Anthony Hughes (Ledford), and Connor Honeycutt (East Rowan, if he doesn't run in the Frosh/Soph race).