Wesley Frazier opened her fall season with a 17:42.6 clocking, good for 6th place.

They must have felt comfortable with so many recent North Carolina prep runners in the college race!

As expected, Thomas Graham (Cary Academy) went straight to the front and led the race from gun to tap.

As the runners came up the hill the first time, Graham was closely followed by Craig Engels (Reagan) and Sam Roberson (Broughton). 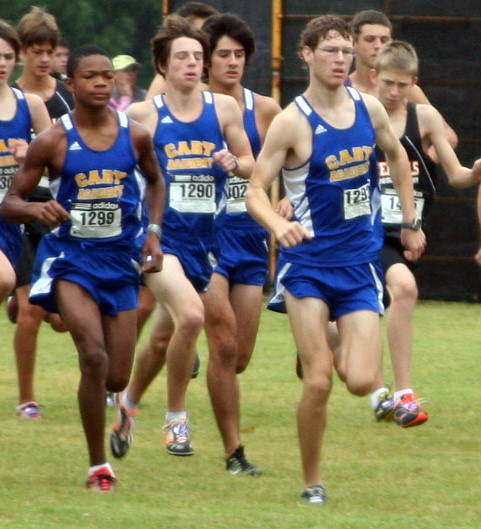 Running from the front in the light rain and slightly muddy conditions, Graham did not pull away as much as he did at Jackson Park.

The final margin of victory was only 7 seconds over Roberson, who was another 8 seconds ahead of Engels. 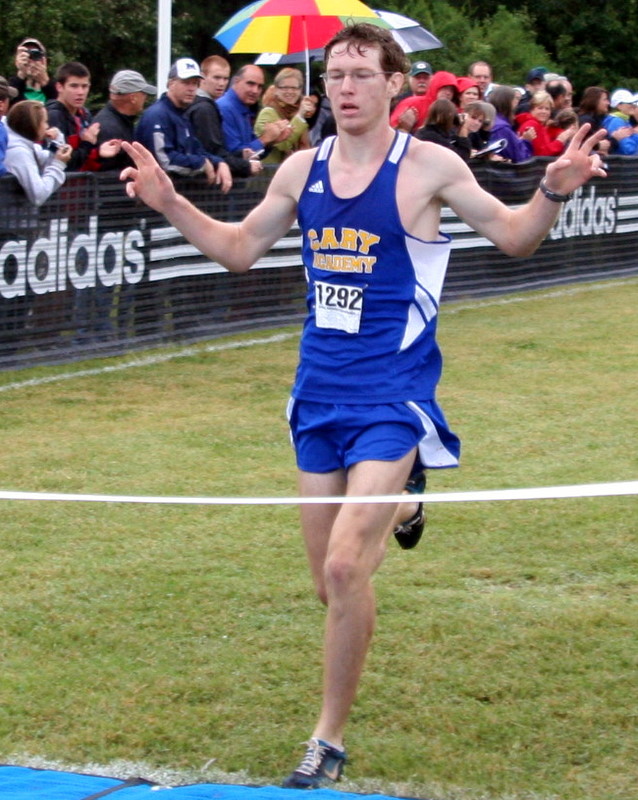 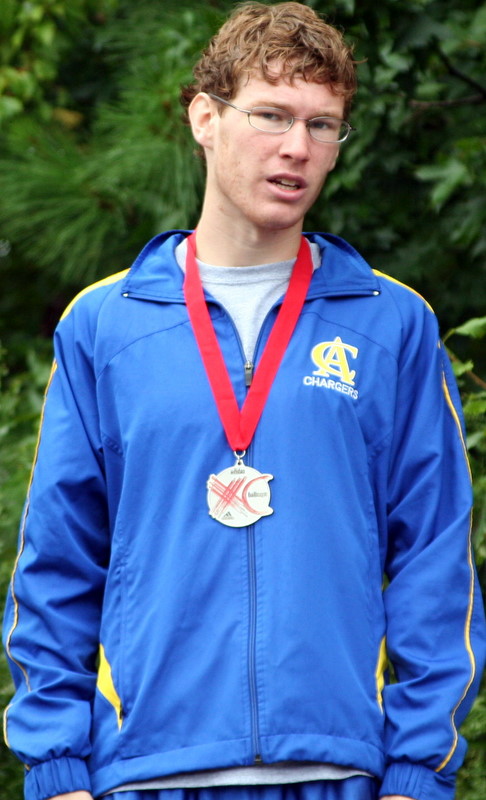 The race was won by Virginia power Midlothian, with four North Carolina schools in a close group behind them.

Chapel Hill had their best race of the season so far, finishing 17 points back in second.

Cardinal Gibbons continued to assert themselves as 3A title contenders, trailing the Tigers by only 9 points.

Broughton finished third, another 9 points behind Gibbons, beating Reagan by 11 in their first meeting this year.

The awards were presented by two-time Olympian Todd Williams, who joined the teams and individuals for photos. 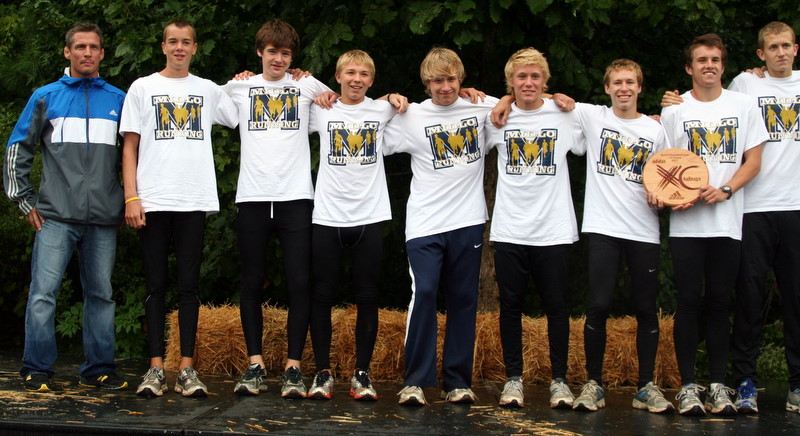 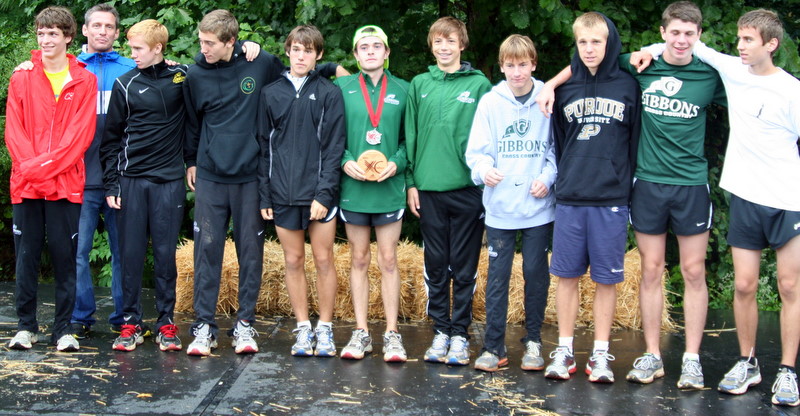 Up front, the early race was a duel between Eliza Dekker (Durham Academy) and Brooke Gordon (TC Roberson).

By the first time up the hill, Dekker had created a little separation on Gordon.

Dana Cox (Panther Creek) had an aggressive start, while the main pack trailed behind her. 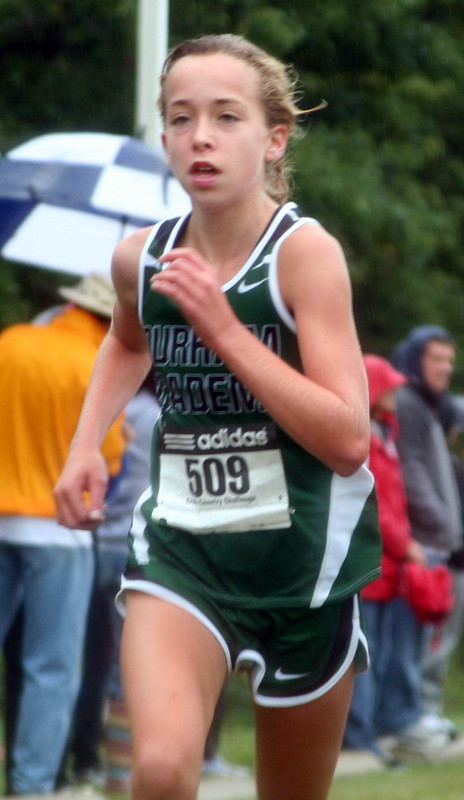 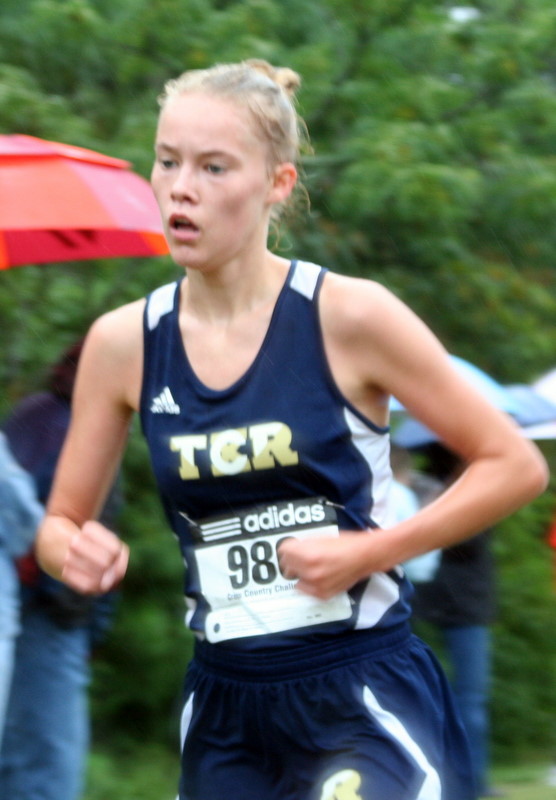 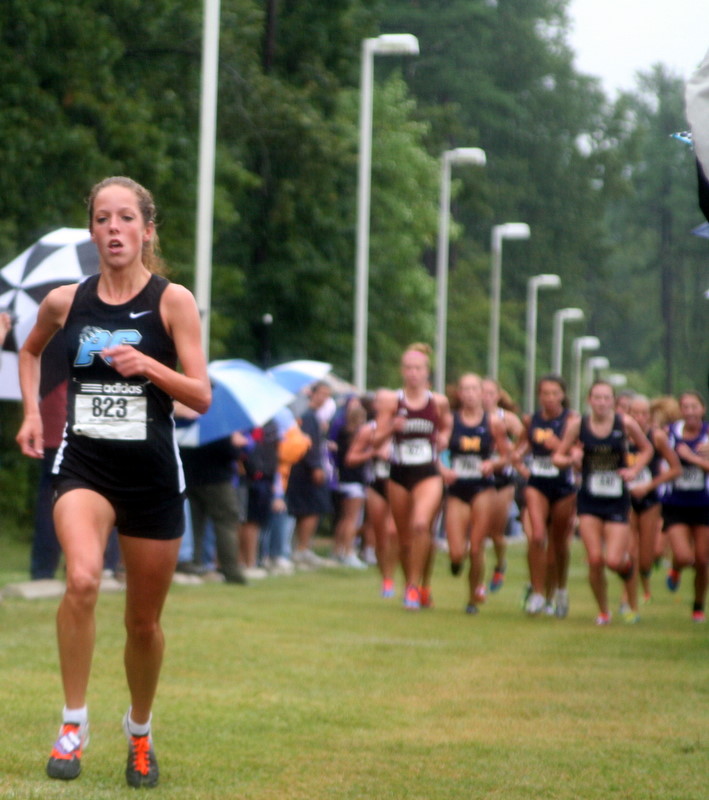 That makes three NC girls under 18 on the same weekend, this early in the season!

Gordon finished second with a strong 18:14.8, while Midlothian's Kara Dickerson emerged from the pack to finish third.

Following them came the lead pack, with 11 girls spaced out by 20 seconds. 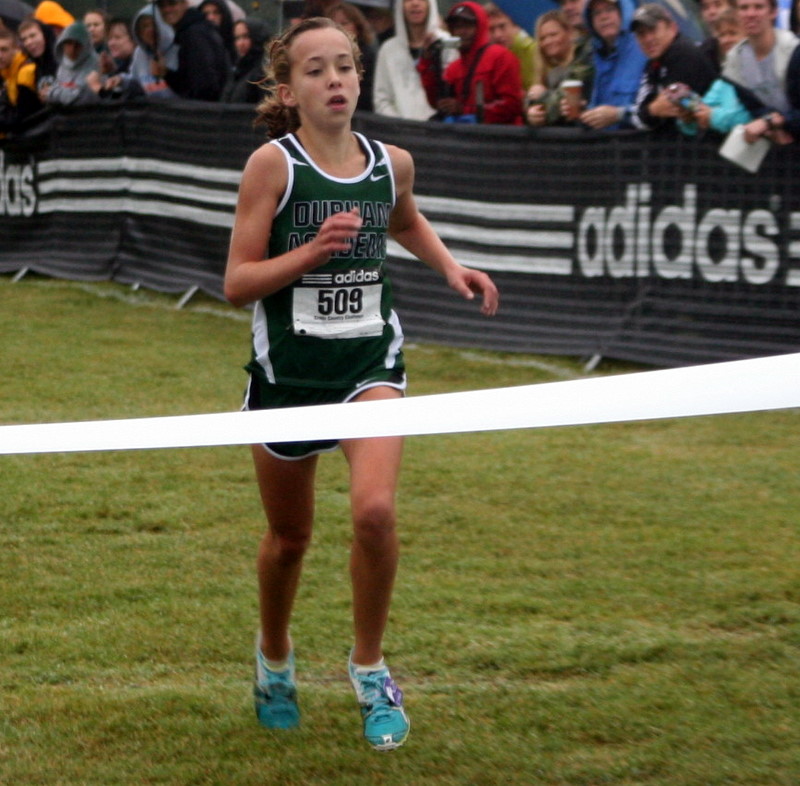 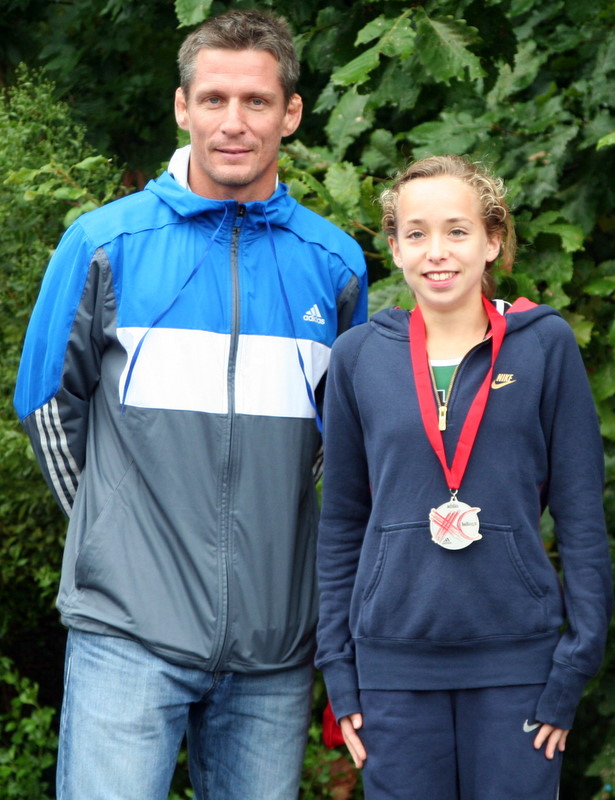 Both teams had 3 runners under 19 minutes and 5 under 20 (Henderson 6), but Midlothian was clearly in control.

It was only their slightly weak 5th runner that brought the team scores so close. 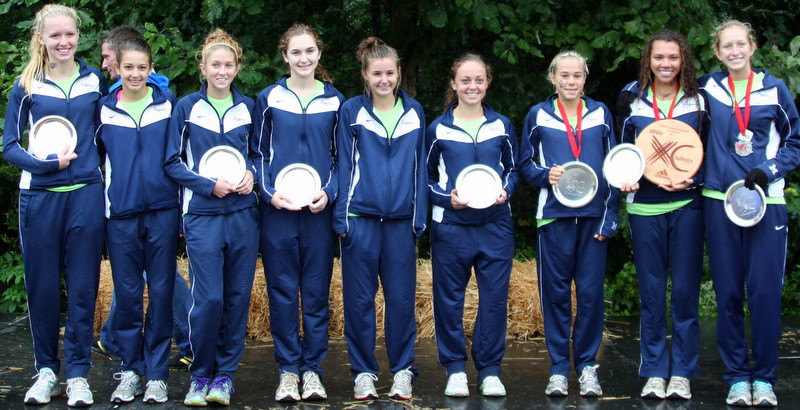 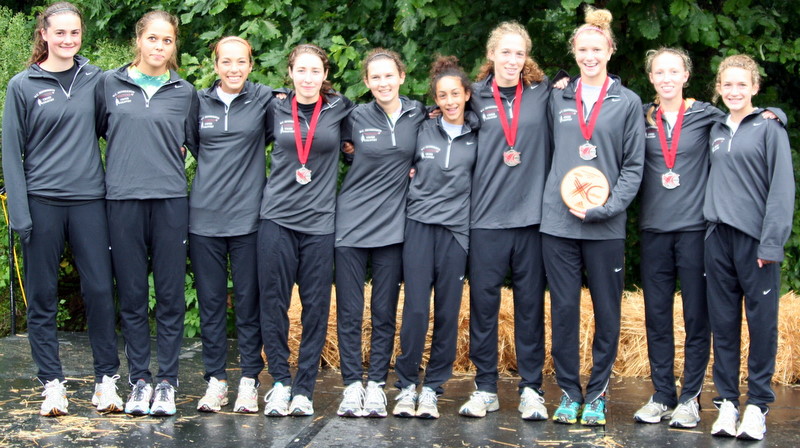 Broughton emerged from the North Carolina schools to finish third, behind strong races from Mattie Blue and Megan Sullivan.

The Caps edged Cardinal Gibbons by 12, with TC Roberson only 5 more points back in 5th. 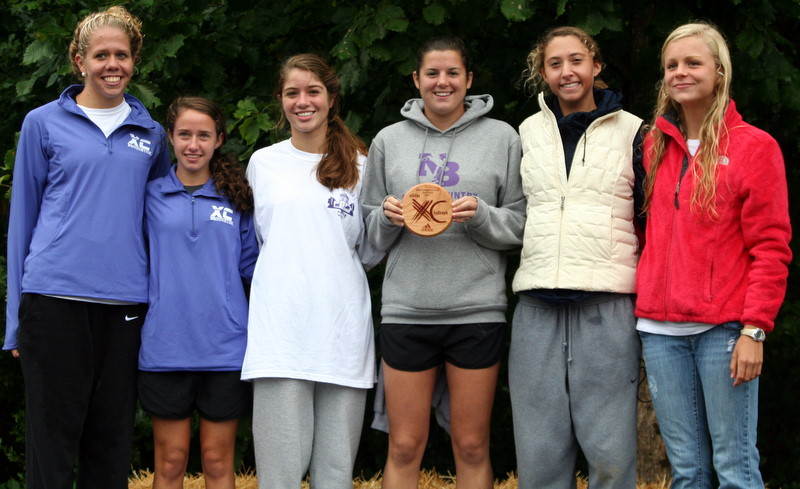 In the end, the day belonged to Midlothian.  Check out all the hardware provided by NC State for this meet! 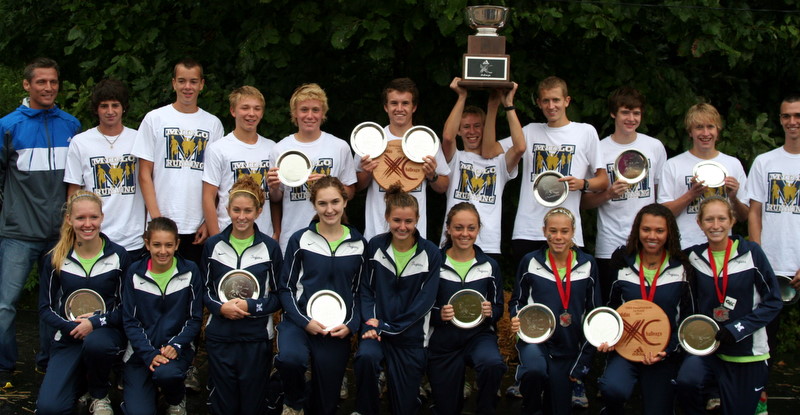 In the boys' unseeded race, David Bradley (Durham Academy) won a three-man charge to the finish to win in 16:13.9.

Drew Buckley and Alec Lane led Marvin Ridge with a 2-3 finish as the Mavericks asserted themselves as a top 5 team in 3A.

The girls' unseeded race was won by Tristan Van Ord of Chapel Hill, her time of 18:47 rivalling the top 10 in the championship race.

Jentzen Jones (Fike) was second, and then Jennifer Stephenson (Village Christian) held off the Chapel Hill pack for third place.

Chapel HIll's girls dominated with four in the top 6 to take the team title, and could have run strong in the championship race.

The Marvin Ridge girls, after some off-season turnover, looked strong once again in finishing second.

Ravenscroft continued to make their case as the best NCISAA team with a strong third-place performance in Cary.