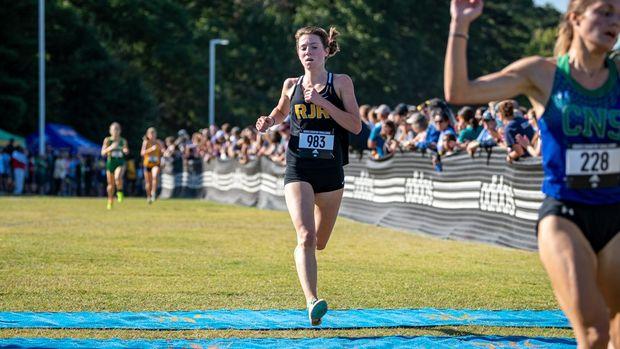 Whether they were in Cary, Charlotte, or all the way in Irvine, California, #TeamNC put on a show this weekend and proved to the rest of the nation that they are one of the premier states when it comes to cross country and track and field.

Rocky Hansen (Christ School) once more proved why he has a case to go down as the greatest of all-time in North Carolina. The Wake Forest commit took to the line for the second time this season, eager to go head-to-head with some of his top competitors that he does not get to match-up against during the state-meet season. He ran a new adidas XC Challenge meet record, breaking the 15:00 barrier for the second consecutive time, this time running 14:45.00. Hansen was just one-second off Ben Huffman's state record of 14:44.00 from 2013's Foot Locker Regional. His time is also US No. 4 this season.

He wasn't the only one to have a big day in Cary, however. It was a huge day for Athens Drive's Krister Sjoblad. The senior ran a huge personal best, 15:07.10, and took 5th place in the championship race. He was the 2nd finisher from North Carolina. Sjoblad has proven that he and his Athens Drive team is not to be messed with this season. In fact, Sjoblad's time is NC No. 25 all-time. Noah Valyo was right on his teammate's tail, clocking 15:28 and finishing 12th (6th from NC).

Caden Townshend (Weddington) is finding his groove this season. He took 8th place and ran a season best of 15:15.50.

The team battle was as tight as it can get. It was the Capitals of Broughton, however, that found themselves with the trophy after scoring 184 points, beating Brentwood Academy, TN by five points. Will Venable and Cooper Widmayer led the way for Broughton with their 15th and 16th place finishes. It is a stellar win for the Capitals and it shows their depth, as runner-up Brentwood had two runners in the top six.

Mount Tabor is starting to put themselves together, after cruising through Friday Night Lights. The Spartans took 4th place as a team, scoring 244 points, and finishing just ahead of Green Hope, who tallied 247 points. They were led by Andrew Burrell's 26th place finish.

Gavin Hansen had a great day himself, finishing 13th in 15:28 and helped lead Green Hope to a 5th place finish.

Christ School proved they can hang with the top schools in the NCHSAA. Along with Hansen, Dawson Reeves placed 29th to help the defending NCISAA 4A champs to a 6th place finish.

Athens Drive also proved they are a threat in the state, as they finished 9th, but they were only 30 points behind Mount Tabor.

The girls championship race at WakeMed was just as exciting.

Leah Stephens (Our Lady of Good Counsel, MD) took the win in 17:21.20. She led from the jump, and held on for a new personal best and a major victory.

Mount Tabor had a beyond impressive performance as a team. The Spartans took the win with 181 points, scoring the win over West Springfield, WV (184) and West Forsyth (187).

Joiner Evans, Bronwyn Parks, and Eliza Brand have quickly become one of the most dangerous trio's in the state, and they showed it with 5th place, 7th place, and 10th place finishes, respectively. Evans ran a personal best of 17:52.40 and she sits NC No. 3 this season.

Lake Norman freshman standout Kasey Dingman was the 3rd and final North Carolina athlete under 18:00. She took 6th place in the girls championship, and was the top underclassmen in the field. Dingman ran a NC No. 6 time of 17:59, and she moves up to NC freshman No. 9 all-time.

West Forsyth used their pack to perfection, and they had a :46 1-5 split to show for it. They were led by 29th and 30th place finishes by Abby Reutinger and Lulu Serang.

Over in Charlotte at the historic Larry McAfee Course at McAlpine Park, the Hare & Hounds provided some stellar racing.

In a loaded girls championship field, it was Hannah Rae Shaffer (Cardinal Gibbons) who took home the win in 18:09.10.

The underclassmen reigned supreme as they placed 1-2-3-4-6-8-10. Sophomore Annie Miller (Metrolina Christian Academy) was 3rd in 18:38. Freshman Anna Edwards (Calvary Baptist) had her third sub 19:00 performance of the season, running 18:41 for 4th.

Ella Pasko (Marvin Ridge) kept her strong start to her season going, with a personal best of 18:46, and a 5th place finish.

Marvin Ridge had three in the top 13, Pasko (5th), Hadley Wilson (11th), and Madalyn Finn (13th), but the depth of Cardinal Gibbons was just too much to handle.

In the boys championship race, it was all Marvin Ridge. They were led by RJ Gajan's come-from-behind win. The senior clocked 15:39, and was in 4th place as the lead group made their way around the pond for the final time. William Heyde was 10th in 16:15, and sophomores David Firestone and Ishan More were 14th and 17th respectively.

It was a strong showing by the Cavaliers of Cuthbertson. After a runner-up finish at Friday Night Lights, they took home another runner-up finish, this time at Hare & Hounds. They were led by senior Peter Schihl, who ran 16:09 and finished 7th.

All the way across the country, in Irvine, California, MileSplit US's No. 6 ranked Cuthbertson Cavaliers made the long journey to compete in the 41st Annual Woodbridge Cross Country Classic. After battling some illness and a late night (9:45pm PST, felt like 12:45am to them), the Cavaliers persevered and took 3rd in a loaded field that included No. 3 ranked Buchanon (CA). They finished ahead of Flower Mound, TX, which must feel extra sweet for the Cavaliers after finishing runner-up to them during indoor nationals in the 4xMile.