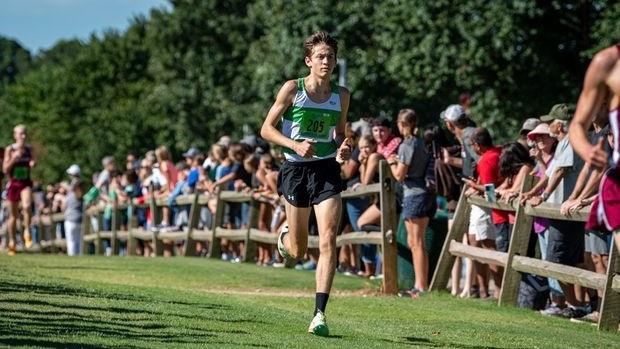 The hype for Friday Night Lights was at an all-time high this year and the event lived up to the hype. With the lights on, the DJ bumping the music, and the light, fog, and bubble machines rolling all night, it was a welcoming sign that cross country was truly back.

Eyes were on the defending state champion Cuthbertson Cavaliers as they made their season debut. They were led by a first place finish from junior Stella Kermes, who just set the bar for the rest of the state for the season. Her time of 17:56 is NC No. 1 on the year.

Her teammate Charlotte Bell had a phenomenal outing, as well. Bell is known for her mid-distance prowess, but she showed out in her opening race of the season clocking 18:00.8 and finishing runner-up.

Alyssa and Justine Preisano were right on the tail of their teammates. Alyssa was 6th in 18:15 and Justine was 8th in 18:27. Lily Fierick made a name for herself with a 12th place finish and was the No. 5 runner for the Cavs.

Marvin Ridge finished 3rd with 181 and Weddington was 4th with 194 points.

Two huge storylines coming out of the night, however, was the breakout performance of Chandler Welsh, and Bronwyn Parks' arrival at Mount Tabor.

Welsh, a junior a R.J. Reynolds, had a huge backend of the track season where she posted some impressive 3,200m times. She hung on with the best of the best and took home 3rd place and ran a huge personal best of 18:09.

Parks is a huge addition for the Spartans, and instantly shoots them up the NCHSAA 4A rankings. She finished 5th overall and ran 18:14.1. Parks is joining juniors Joiner Evans (9th place) and Eliza Brand (13th) on the squad.

Rounding out the top ten were Grace Hanson (7th) and Kasey Dingman (9th). Dingman was the top freshman in the event.

On the boys' side, we saw a breakout performance out of Cary's Marco Evans. The now-senior was 73rd at the 2021 state championship and had a personal best of 16:44.79. Now, he can call himself Friday Night Lights Champion and can also call his personal best 15:31.

Zack Gilbertson (Pinecrest) continued his hot start to the season and took runner-up in 15:33.2.

Krister Sjoblad (Athens Drive) had a great opening 5,000m. The senior took 3rd place in 15:33.9. Junior teammate Noah Valyo was right on his tail, and finished 9th in 15:47. The duo proved to be strong, and helped boost Athens Drive into winning territory.

Green Hope used their pack running to their advantage and it paid off with a convincing victory, however. The Falcons scored 127 and put their entire top five in the top 45 overall. They were led by Gavin Hansen and Luke Young's top 20 performances.

The boys of Cuthbertson and Athens Drive showed they were no fluke and fought to the line. It was the Cavaliers, however, who claimed runner-up with their 6th runner acting as the tiebreak.

The breakout star of the boys' side belongs to Grimsley's Jacob Barrow. Barrow had a personal best of 16:14.82 heading into the event and smashed that time, clocking 15:42.9 and taking 6th place.