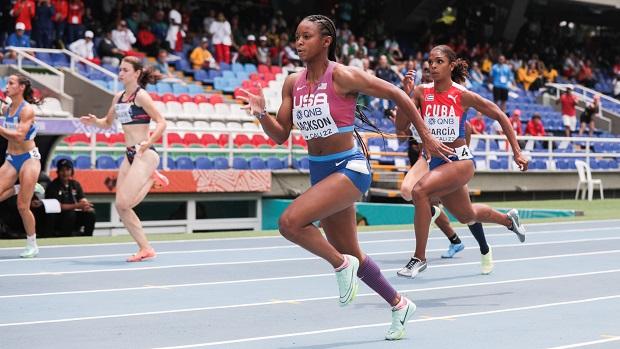 The long junior campaign of Shawnti Jackson (Wakefield, NC) has finally come to a close this week in Cali, Colombia. The USATF U20 100m champion made the trip down to Colombia to compete in the 100m dash at the IAAF U20 World Championships. She was joined abroad by fellow-NC athletes Akala Garrett (400mH finals on 8/4) and Kaylyn Brown (4x400m gold medalist).

Both the semi-finals and the finals would take place on Wednesday, and Jackson is no stranger to running multiple events and heats in a single day. She clocked a personal best of 11.16 in the semi-finals to take the top seed headed into the afternoon's finals. It was a long awaited matchup with Jamaica's Tina Clayton and Serna Cole.

Jackson battled hard in the final and earned a bronze medal for her country. She was rewarded with a personal best of 11.15, and ties her with the 6th fastest performance in high school history. Her time is No. 7 in the world for U20 this season.

Watch MileSplit's featured short Shawnti Jackson: Legacy if you haven't yet to get an inside look at the life of the superstar