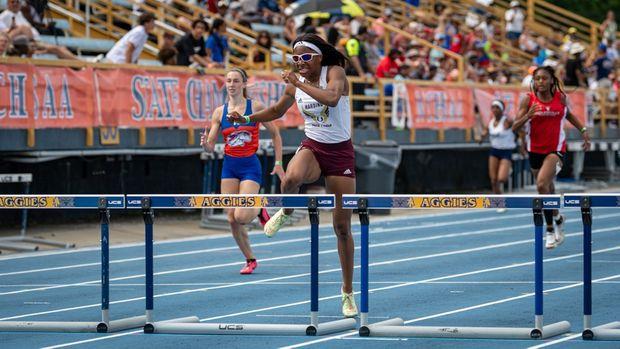 With the wave of the high school national meets over, top North Carolina talent had their sights set on the USATF U20 Championships in Eugene, Oregon at Hayward Field.

Before we get into the U20 action, Garner alumnus Randolph Ross took 3rd place at the USATF Outdoor National Championship, and A.L. Brown alumnus Cambrea Sturgis is in the finals of the 200m dash, that will take place Sunday afternoon.

At the U20 Championship, however, it was a long-time coming for Akala Garrett. The superstar hurdler has been flawless on the season, winning each and every 100mH, 300mH, and 400mH competition she has been in. She finished the high school season US No. 1 in all three hurdle disciplines. She cruised through the prelims of the 400mH on Friday, running 58.49, and winning her heat. Saturday afternoon was the 400mH final, and what Garrett has been gunning for all season. She made it know she was the top U20 hurdler in the country, taking the national title in personal best fashion 57.47. Her mark improves her already NC No. 2 all-time performance.

Shawnti Jackson claimed her own U20 National Title in the 100m. It wasn't just any ordinary run for Jackson. Although the win was +2.7 she managed to run a all-condiditons high school No. 4 all-time 11.07. It is US No. 1 this season, as well. Jackson is surely hunting that high school national record of 10.94, and to be the third high schooler in history to break 11.00.

On the men's side of the 100m, Terrell Robinson Jr. finished 7th place in the finals.

In the women's high jump, Cheyla Scott took third place clearing 5-11.25. There was a four-way tie for the lead broken by least amount of jumps missed.

Kaylyn Brown added another third place finish to North Carolina, as she clocked 53.11 in the open 400m. Her time is good for a new personal best for Brown.

Next up for the top-two finishers is the 2022 World Athletics U20 Championships in Cali, Columbia the first week of August.