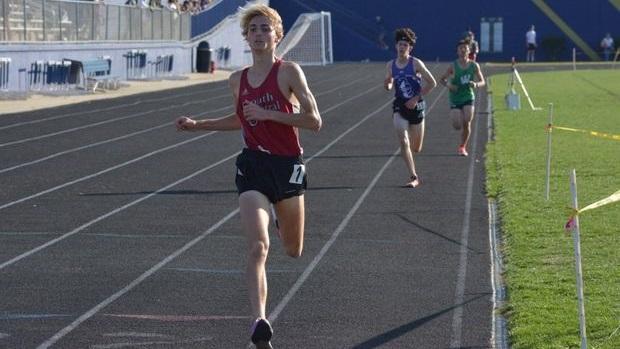 The 'Blaise Atkinson Show' is back in 2022. The Lake Norman senior won the 2021 NCHSAA 2A 100m, 110H, 200m, and 300H state titles, but a reclass up to the NCHSAA 3A division makes things a tad bit more difficult for the UNC-commit. He is the top seed in both the 110H and 300H by a good margin. However, that 100m field is completely stacked. It features Brendan Henby (West Henderson) and Sincere Moss (Ashbrook), who both went sub 11.00 last weekend. Dudley teammates Isaiah Monroe and Le'Ezra Brown are looking to go 1-2 in the event. Atkinson is seeded 11th.

Senior Christian Drawhorn-Sloan (Croatan) is gunning for a record in the wheelchair 100m and 200m.

Atkinson isn't the only one worth of their own show, as a West Mecklenburg senior is looking to put on her own: 'The Sanu Jallow Show.'

Monroe and Henby will be back in the boys' 200m, and will face off with top seeded Allen Barnes (Northern Nash).

Monroe will be going to a triple of his own in the 400m, as he is seeded 2nd. Top seed Jaylen Currence (Northwest Cabarrus) ran 48.78 at regionals, and was the only boy under 49.00 in 3A last weekend.

Eva Rinker (Tuscola) and Lily Yampolsky (Lake Norman) are seeded No. 1 and No. 2 in the 800m, but freshman Jillian Parks (Central Davidson) and Bella Green (North Lincoln) are hunting for their first taste of gold.

A rematch of the NCHSAA 3A Mideast Regional, seniors Hannah Preisser (Carrboro) and Caroline Murrell (Northwood) are the top seeds in both the 1,600m and 3,200m. They will be facing off for the final time this weekend. They have gone head-to-head five times on the track; Preisser has won both of the 1,600m's, but Murrell is 3-0 in the 3,200m.

Austin Brotemarkle (Forestview) is the top seed in the 3,200m.

The top three girls 4x800m teams are as tight as they come, which should make for some exciting action. North Lincoln has the top seed of 9:58.02, but not by much. West Henderson ran 9:58.54 last weekend and North Buncombe went 10:01.02. It is just as tight on the boys' side, as six teams were under 8:20 at regionals. Northwest Cabarrus, Central Academy of Technology, Northwood, Orange, Durham School of the Arts, and South Central sit seeded 2nd-6th respectively, but any of these teams can run away with the win.

West Henderson girls are the top seed in the 4x100m and 4x200m. J.H. Rose is top four in both the short relays as well.

The top three seeds in the girls' 4x400m are only a second apart, with West Carteret holding the top seed, followed by E.E. Smith and Atkins.

The same goes for the boys' side as Dudley is the top seed, with Croatan and Walter Williams on their heels.

Ashe County sophomore Emily Hartsoe is looking to add two more state titles to her resume. The defending NCHSAA 3A Indoor shot put and 2021 NCHSAA 2A Outdoor discus champ is the top seed in both throws. She won her regional in both the throws, as well.

The boys' throws are making out to be much closer at the top. There is only a one foot gap from the top seed and the 5th seed in the shot put competition. Nathaniel Rivers (Parkwood) is the top seed with a regional throw of 49-1.50. Croatan seniors Will Rouse and AJ Matas are seeded 2nd and 3rd, with Southern Guilford senior James Squires 4th, and Northside junior Gabriel Urraca.

Senior Christian Drawhorn-Sloan (Croatan) is going to put on a show in both the wheelchair shot put and discus.

Indoor state high jump champion Tyler Collins (West Carteret) is back ready to tackle the outdoor state championship. She was the only athlete to clear 5-6 during regionals.

The boys' field is tight up front, with Shyheem Taylor-Austin (Havelock) and Christian Leak (Union Pines) both clearing 6-4 last weekend.

3A Mideast Regional champion Caroline Fowlkes is the top seed in pole vault after clearing 11-0 at regionals. She jumped 11-6 at her conference championship.

Oak Grove senior Jacob Murphy is chasing gold of his own on the boys' side. His 14-0 seed is the top of the field, but Franklin's Matthew Blake Cassada is right on his tail.

Cameron Snead (West Johnston) has been one of the best jumpers in the state all season, and is looking to cap it off with two titles. He is the top seed in the triple jump, and 3rd in long jump. Ahead of him in long jump are Freedom's Drew Costello and Northside's Michael Tate.