The individual battle up front broke out early between Jacob Fiorillo (Corvian Community) and Carson Gilliam (Thomas Jefferson Classical Academy). Right off the gun the duo jumped to the front and 800m in they had already put a gap on the field. They were stride for stride as they made their way through a windy Ivey Redmon course.

Each made attempts to pull away but every move was matched. With 800m to go Gilliam took a stride lead over Fiorillo and started to eye the finish line. As they made their way up the final hill Fiorillo was right on the shoulder of Gilliam. He waited for the perfect moment to strike and they came cruising down the home stretch neck and neck. Fiorillo had just a little more in the tank and held on to win the NCHSAA 1A title in 16:34. Gilliam was right behind in 16:36.

Bishop McGuinness used Pacholke's 3rd place finish to help them run away with the team title. Evan Sturgill just missed an all-state spot and was Bishop McGuinness' No. 2, placing 12th.

Their pack in their 3-7 runners really sealed the deal on their victory.  Arrington Culbertson finished as their No. 3 taking 21st place. Right on his tail were seniors Matthew Agarwala and Noah Goodman who took 23rd and 25th respectively.

Their 6-7 runners would've been the No. 3 runners on any other team in 1A, showing just how deep this program runs. They finished right on top of each other with Alessandro Lopez-Morales finishing 29th and Scott Craven 30th.

The race for the individual crown on the girls' side was one of the most anticipated races of the entire day. Defending champion Lauren Tolbert (Highland Tech) was ready to defend her crown, racing Briley Bickerstaff (Riverside) on the course for the final time. There was a new face at the front with those two that wasn't last season in Swain County freshman Arizona Blankenship. Blankenship took down Tolbert at the 1A West Regional and has been on fire all season.

Blankenship was pushing the pace early and took the trio through the mile in 6:04. The three quickly established themselves at the front of the race as they had gapped the field almost instantly. 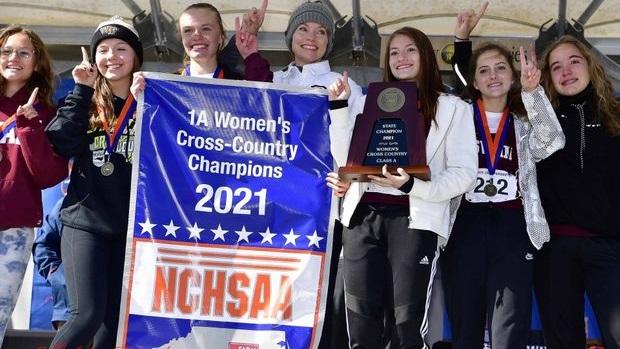 She held on down the home stretch and captured her first career NCHSAA championship! She clocked 19:06 and took down the senior Bickerstaff, who ran 19:14. Tolbert held on for 3rd in 19:50. The field in 1A is young as Tolbert and Bickerstaff are the only two seniors in the top 12. Sophomores Emberleigh Pauley-Brown (Gray Stone) and Ellie Poitras (Woods Charter) finished 4-5 and freshman Nicole Alfers (Christ the King) was 6th. Maddie Sparrow (Woods Charter) was one of two juniors to make all-state as she finished 7th. Two more sophomores in Elizabeth Lalor (Voyager) and Kathyrn Haas (Avery County) finished 8-9. The other all-state junior was 10th place finisher Kaylee Smith (Pamlico County).

On top of Blankenship's victory, Swain juniors Amaya Hicks and Gracie Monteith were 14th and 15th respectively. Rounding out the top five for Swain were Emily Ulaner, 29th, and Laiken Harvey, 52nd. The 4-5 did their job perfectly and helped bring Swain the team title with 89 points!

Thomas Jefferson Classical Academy was only 12 points behind with 101 points.