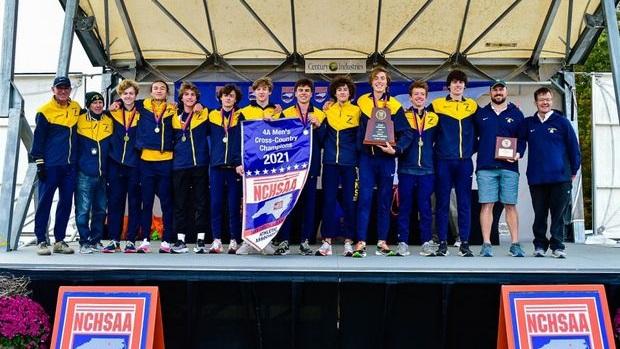 The girls race was loaded with superstars and the top girls did not waste any time getting up to the front. Lilly Walters (Hough), Sarah Mitchell (Apex), and Hannah Rae Shaffer (Cardinal Gibbons) broke away from the field early and crossed through the mile mark in 5:24. All eyes turned to Mitchell and Shaffer as the duo began to drop the hammer at the halfway point. They were stride for stride running down the long straightaway at Ivey Redmon, with neither girl willing to give any ground.

While no one knew who'd come out victorious, everyone knew that the winning time was going to be fast.

And fast it was.

Shaffer made the first move with about 1000m to go, and Mitchell did not immediately answer. The senior waited for her moment and finally took the lead up the final hill right before they hit the home stretch. Once Mitchell's eyes locked onto the finish line there was no stopping her.

Hannah Rae Shaffer battled to the line and earned a runner-up finish in her state meet debut clocking 17:32.5. She is now No. 6 all-time in both state meet and Ivey Redmon history!

The battle for 3rd was tight, as well! Abby Weber (Chapel Hill) just finished ahead of Alyssa Preisano (Cuthbertson). Weddington's Emma Jones rounded out the top five. Olivia Bufalini (Laney) builds off her personal best from her regional with a 6th place finish. This was the first race for sophomore Mary Bonner Dalton (Myers Park) all season. She had a great day and was just behind Bufalini finishing 7th. Rounding out the top 10 and earning the final all-state spots were Elizabeth Ritter (Weddington), Stella Kermes (Cuthbertson), and Maddie Huecker (Lake Norman).

The team battle was heating up early as both Weddington and Cuthbertson putting two in the top ten. The programs split their conference and regional championships, so all the marbles were on the line at the state meet. Cuthbertson took the early advantage with their No. 3, Lillian Nasta, just missing all-state finishing 11th. Two of Cuthbertson's sophomores raced like they had been there one-hundred times before. They sat on each other's shoulders and used each other to push. Charlotte Bell finished 16th and earned herself a huge personal best. Not to be outshined was Justine Preisano who clocked a huge personal best of her own and took home the 17th position. Five in the top 17 overall is just too hard to overcome.

Cuthbertson took home the 2021 NCHSAA 4A championship with 50 points!

Weddington hung on for 2nd with 98 points!

Cardinal Gibbons continued their hot streak and almost caught Weddington. They finished 3rd as a team, by only 3 points. Led by freshman Hannah Rae Shaffer (2nd), this young team definitely earned some valuable experience. Fellow freshman Ina Lazarczyk just missed an all-state spot finishing 12th overall, and was the No. 2 freshman in the race behind her teammate. Peyton LaNasa had a great race and was 28th with Gibbons' No. 4 Addy Mitchell right behind her in 29th. Keira Lumley rounded out the top five for Cardinal Gibbons with a 46th place finish.

Dozens of runners had legitimate cases for all-state spots in the boys' race as the field in the 4A classification was arguably as deep as ever.

Griffin Horner (Lake Norman) led the lead pack of... well pretty much everyone, through the mile in 5:06. Of the 180 competitors, about 125 (if not more) of them were within 10 seconds of the leaders at the mile mark. The field barely separated as they made their way back around the loop and up the hill to the long straight away. As they hit the 2 mile mark the lead group was down to around 20 runners, with no one daring to make the first move.

As they made their way around the baseball fields it was Will Soule (Mount Tabor), Tyler Surface (Millbrook), and Jacob Laney (Porter Ridge) who started to push the pace. With 1000m to go the top three was trying to pull away from the field, but the chase pack would not let them.

Laney hit the loop for the final time as he started to pull away from Soule. Soule, who said he learned this tactic from watching former teammate and state champion Cameron Ponder, used the small downhill to surge, catch-up, and pass Laney. Once Soule made the final move it was history. He came charging up the hill and hit the straightaway with a clear mission.

Soule came roaring down the straightaway and claimed the NCHSAA 4A Boys title clocking 15:31. His time is good for No. 23 all-time at Ivey Redmon.

Laney held on strong but just couldn't chase down Soule. He finished 2nd in 15:34. Laney, a junior, was the only non-senior in the top six. Ethan Snyder (Porter Ridge) out-leaned Patrick Gibbons (Ardrey Kell) for 3rd, running 15:46.01. Gibbons was 4th in 15:46.40. Griffin Horner capped off his fantastic season with a 5th place performance.

Davis Potter was the 2nd runner for Mount Tabor as the senior finished 6th.

Douglas Gledhill (Mount Tabor) made it three all-state runners for the Spartans finishing 9th and Hoggard senior Evan Pena rounded out the top 10.

Mount Tabor only won their regional over Weddington by one point, but they made sure to leave no margin for error today. Andrew Burrell finished 21st for the Spartans and Lucas Plitt sealed the deal with his 43rd place performance.

Weddington, who was the first team with their entire top five in, couldn't overcome the three single-digit point scorers of Mount Tabor and finished 2nd, only 11 points back, 64-75. Weddington had a 18 second 1-5 split, which is remarkable to say the least.

Green Hope used their 47 second 1-5 split to garner a 3rd place finish with 187 points, finishing just ahead of Lake Norman with 192 points. Chapel Hill was 5th with 212 points.