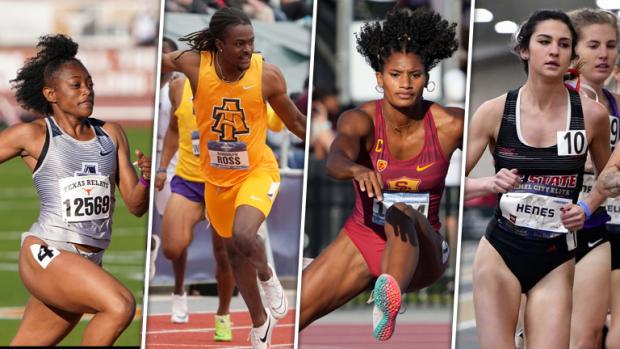 #TeamNC alumni were on fire at the NCAA championships this week in Eugene, Oregon. Four athletes claimed six different events over the course of the last two days.

On Friday, Garner alum and NC A&T sophomore Randolph Ross ran a Collegiate No. 3 all-time mark in the 400m clocking 43.85 running away from the field over the last 100m. It was a lifetime best for Ross, but he was no where near done. Ross represented NC A&T on the 4x400m as the 2nd leg. He clocked a 43.6 split and made up a ton of ground on the field handing off in the lead. They went on to win the 4x400m title in 3:00.

NC A&T finished 3rd overall as a team, the best an HBCU has ever finished!

On Saturday, the girls from North Carolina put on an incredible show. Anna Cockrell (Providence Day/USC) started the day off right with dominating 100mH victory. From the gun Cockrell shot out the blocks soaring over the hurdles. She crossed the line emphatically in 12.58!

She was not satisfied with just one national title by any means. It was less than an hour later she was on the track lining up for the 400mH finals. Cockrell had the fastest reaction time of the bunch to start the race, and never looked back. She was challenged over the last 50m by Shannon Meisberger (Arizona) but powered through to claim her second title of the day! Her two victories helped USC win the team national championship!

Cambrea Sturgis (A.L. Brown/NC A&T) started off her day in the 100m finals. She ran 11.20 in the prelims, which ranked her fourth overall. Sturgis had the fastest reaction time in the race at .124. She powered to an early lead and held a final push by USC's Twanisha Terry taking the 100m national title in a season best time of 10.74! Like Cockrell, she had less than an hour before she had to line back up on the track. This time, Sturgis lined up for the 200m final. She had the second fastest time in the prelim. She ran a lifetime best and collegiate leading 22.12, only a tenth of a second off the collegiate record.

Cambrea Sturgis! She takes her second NCAA National title of the day in the girls 200m as a sophomore! Tamara Clark makes it a 1-2 NC finish in the 200m Final :triumph: pic.twitter.com/83uaBzr6P4

NC State senior and Green Hope alum Elly Henes left it all on the track in her final race for the Wolfpack in the 5000m. Henes sat in the lead pack for the whole race, and waited until the final 200m to make her final move. Henes, a fantastic racer, held off a final push from conference rival Katie Wasserman of Notre Dame and claimed the 5000m national championship in 15:28! She becomes the first NC State women to win the 5000m since...her mother Laurie Henes (formally Laurie Gomez) in 1991.

It was a fantastic showing from all North Carolina alumni!

How did North Carolina stack up against the rest of the country? You tell us.