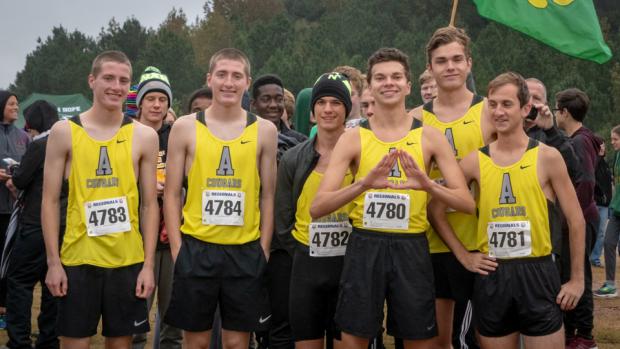 UPDATE: The NCHSAA has made the decision that Apex 6 individuals who qualified will not be able to score as a team this weekend at the NCHSAA State Championships.  We'll post more on this story as it develops.

The Apex boys made history at the 4A Mideast Region on Saturday in Cary, qualifying six boys to the state championships without getting an auto team bid.

With 17 boys teams entered, only four teams would get qualifiers for next week's NCHSAA State Championships. And coming into the meet, the top four 4A teams competing were Cary, Cardinal Gibbons, Green Hope and Panther Creek. Apex was ranked fifth in the region and was the sixth team in 4A.

Ideally, the Cougars needed a strong day to take down one of these 4A powerhouses.

And here's the thing:

Apex did just that, as its top six boys all posted new season bests. Unfortunately, the top four teams ahead of them also had their best meet of the year, leaving the Cougars in fifth place, outside the auto qualifier.

But oddly enough, Apex still got nearly its full team through to state. Apex's first six were through within the seven available individual qualifying spots in the regional.

It's easy to say that the 4A Mideast is the "region of death" in North Carolina this year.  The top four teams were separated by 12 points, and the Cougars were matched with those athletes, though their fifth man and sixth had the second fastest sixth man of any of the 4A Mideast teams.

Apex's top 6 boys only placed behind athletes from Cary, Green Hope, Panther Creek or Cardinal Gibbons and Tim Haughton (Apex Friendship), who took seventh and will advance to the state meet as well.

NCHSAA rules designate the top seven individuals not on qualifying teams advance to the state meet.  Andrew Edney, Scott Kennedy, Emmett Lynch, Jacob Vehslage, Simon Griggs and Austin Dewey all advance to the NCHSAA State Championships, not as a team but as individuals.

This is the first time this has happened, as the NCHSAA just changed from five qualifying individuals to seven in 2017.  It was possible in the past, but a team has never put five individuals through to the state meet without qualifying as a team.

So this is unprecedented. There is nothing to base this situation off, and it's unclear whether Apex will score as a team at state.

But if this loophole does happen, Apex has a shot to be a top 4 team at the NCHSAA State Championships behind another strong performance next week.

Another question would be if they allow Apex to be an additional team from the Mideast at the state meet, would that allow the next six fastest individuals to advance as the Mideast qualifiers? That would advance Colin Baumgartner (Jack Britt), Daniel McAdams (Jordan), Ryan O'Hare (Holly Springs), Carter Reed (Apex Friendship), Gavin Russell (Middle Creek) and Naim Bell (Apex Friendship) to the state meet from the region.

It's brutal to have such a good day and potentially be on the outside looking in. From what they showed today they certainly deserve a shot to compete as a team next weekend and I hope we receive positive news from the NCHSAA on this this week.  If not, expect a lot of yellow out of the 4A Mideast Individuals starting box next weekend!