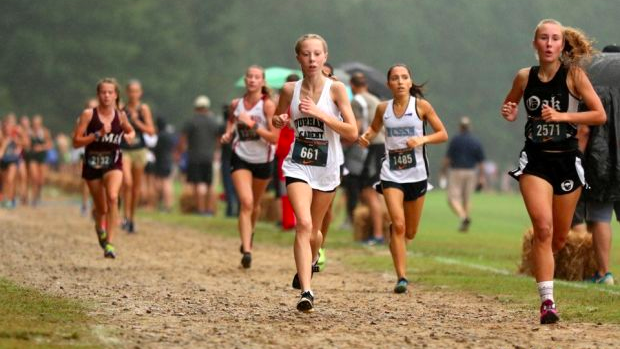 30 years ago on October 29th, 1988 the NCISAA ran as one classification and the event was swept by Durham Academy boys and girls at Christ School.

Conrad Hall of Durham Academy won the event in 17:15 leading his teammates to a perfect score of 15.  On the girls side Durham Academy scored 11 points (only scoring three runners) as they placed 5 girls in the top 9.  Durham Academy's fourth girl was Virginia Reeves taking 7th overall in 23:02.

Why is any of this significant to the 2018 event?

Today the Western NC magic that helped Conrad and Virginia prevail back in 1988 helped their 7th grade daughter Allison Hall win the NCISAA 4A Individual title!  Allison entered today with a seasons best of 19:12 and was one of the top ranked 4A girls heading into the race.  Last week she placed 3rd at the TISAC Championships where her 19:12 PR came from.

If you haven't seen todays Jackson Park course was a mess due to constant rain prior to and throughout the duration of the meet.  The footing was really difficult as the mud and standing water only seemed to get worse as the day went on.

A lot of this out at Jackson Park. Get ready #NCISAAXC pic.twitter.com/wzRHUT7KVE

Hall battled with teammates Stella Stringer, Anna Catherine Wilson and NRCA's Brooke Robinson early in the race.  Stringer and Robinson had both beaten her at the TISAC meet a week ago.

The trekked through the second loop of Jackson Park and it became a two girl race between Hall and Stringer.  Hall was able to pull ahead of Stringer and clock a 20:14 on a course that ran approximately 1:30 seconds slower than athletes PRs.  She was also able to lead Durham Academy to a 1-2-3 finish and the schools first girls cross country title since the NCISAA won the inaugural 3A title in 1996!

Second place was her father Coach Conrad and his Cary Academy girls with a score of 36 to 61.

With 5 more years to go Hall will have a shot at this record, though her teammates in freshman Stella Stringer and sophomore Anna Catherine Wilson will certainly be giving her a run for her money.

Congrats to the Hall family on a truly historic day!