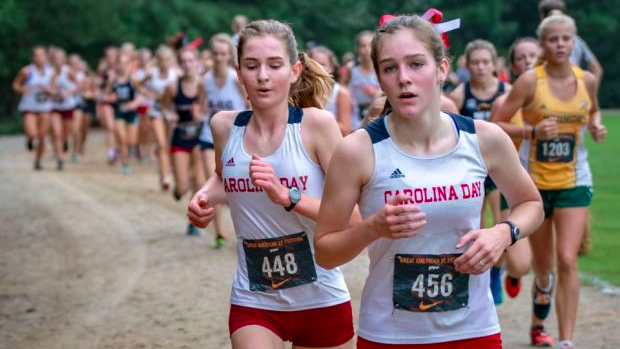 Carolina Day girls have won the last four NCISAA 2A Team Titles and along with a lot of old 2A teams they've made the move up to 3A in the realignment.  Despite the addition of some larger schools this Carolina Day girls team might be the most dominant we've seen at the state championships.

Heading into the meet on Ryann Aycock (Cary Christian School) has run faster than Carolina Day's 6th girl.  Aycock is the only girl that has broke 19 minutes this season and will come in as a favorite for the 3A Individual title despite only being in 8th grade.  Aycock took 11th in the 2A State Championships last year and has certainly taken her talent to the next level over the last year.

This will not be an easy win for Aycock as she'll face off against Olivia Sutter (Carolina Day) who has run 19:11 this season.  Sutter is a swimmer who also excels in track and cross country with PRs of 18:42, and 5:15 and 11:14 on the track.  She was the state champion in the 3200 last year for the NCISAA 1A/2A and placed 3rd in 2A back in 2016 XC.  We should expect the best day yet from Sutter tomorrow who always seems to peak at the right time.

The battle behind the top 2 looks to be tight.  Carolina Day has just a 9 second spread amongst their 2nd through 5th runner on the season ranging from 19:50 to 19:59.  Ella Dockendorf was 2nd in 2A a year ago and the junior is currently their #2 girl.  They'll have senior Ellen Weaver, freshman Erin Hovendon, 7th grader Abby Smith nc and freshman Katie Rudins all fighting for a top spot tomorrow.

Carolina Day will be heavy favorites, but we should see an intense team battle for second between Asheville School, Asheville Christian and Cary Christian.  Asheville School was able to edge Asheville Christian at the CAA Championship last weekend and will have a good rematch tomorrow.  ACA has two girls that could place ahead of Asheville School's #1, but Asheville School has strong depth through 5 with a 44 second gap and a 20:42 team average.  With Aycock and Vestal up front it'll put Cary Christian into the mix, but they are going to need a big day from their 3 through 5 to make up the gap on the two Asheville schools.  Their current 2 to 3 gap is over 2 minutes heading into the meet.  If that gap closes tomorrow they'll be able to make up a lot of points quickly in hopes for a podium finish.

The boys individual battle might be the best of the day with five boys in contention for the individual crown in Matthew Fowler (Concord First Assembly), Harrison Oswald (Carolina Day), Reece Collie (ACA), Daniel Similton (Hickory Grove) and Will Scott (FCDS).  Fowler and Oswald will head in as two of the favorites with the fastest seasons best of 16:04 and 16:10 respectively.  Collie holds a seasons best of 16:23 and Similton 16:24.

Fowler is coming off a win at the MAC Championships and looks to improve on his 2A runner up finish last cross country season.  Earlier in the season he ran 16:53 on this Jackson Park course, but has shown a big improvement since then as he looks to win his first NCISAA State Title as a senior.

Oswald impressed a few weeks ago at Great American where his 16:10 PR comes from.  He took 3rd at the CAA Championships last week and was the first 3A finisher in the field ahead of Collie in 4th.  Last year he was 4th overall in 2A, but has put together a very consistent season as he looks to contend for the individual crown tomorrow.

Collie was a state champion on the track last year as a sophomore in the 1600m with a seasons best of 4:26.  He ran 17:15 at the NCISAA State Championship last fall taking 9th in 2A and will look for more this weekend after putting together a strong cross country campaign.

Similton finished behind Fowler at the MAC Championships and has been under 17 minutes four times this fall.  His best came at the Jungle Run earlier in the year.  He was 30th in 3A a year ago, but will contend for a top 5 finish this fall.

Will Scott will be a guy to look out for despite having the fifth fastest season best on the year of 16:42.  He won the PTAC Conference Championship last week and has a PR of 16:19 from a year ago.  Scott was 10th as a freshman in 3A last year and proved to be one of the better freshman boys in North Carolina.  We could see a big peak from him tomorrow.

Asheville Christian has a strong team that will look to defend after winning in 2A last year.  This is a young team with no seniors, but they return a lot of experience only losing one of their top 7 boys from last year.  Reece Collie and Jax Ledford will look to lead ACA tomorrow with top 10 finishes.  On the year they hold an average of 17:27 with a 1:46 second gap.

Coastal Christian and Forsyth Country Day look to be in the running as well both with an athlete who has top 5 potential in Nicholas Scrocco and Will Scott.  Coastal Christian is pretty even with ACA through 4, but their 5 will need to have a big day in order to close the gap.  FCDS has four guys pretty close together from 4 through 7, and their key tomorrow will be to close the gap from 3 to 4.

The 2A boys race is has always been a wild one with close team scores. I expect nothing less as most of the schools transition up to the 3A ranks.