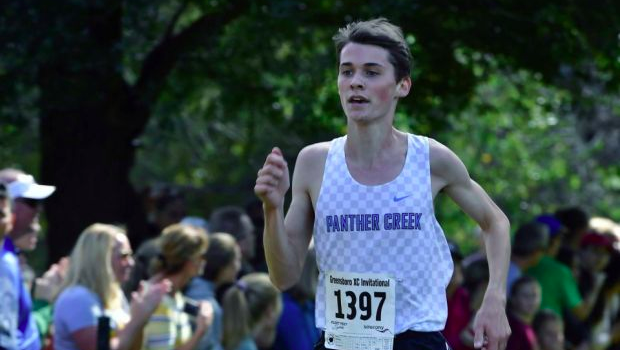 Three of the states top programs are set to face off at Hagan Stone for the 35th Annual Greensboro Invitational in Cary, Chapel Hill and Panther Creek amongst others.  Individually we'll see a very strong competition up front led by Joey Bream (Panther Creek) who won three weeks ago at Friday Night Lights in 15:49.

Bream was the states fastest returner this year with a 15:38 5K from last years regional week.  He proved he was going to be a star this season after clocking 15:49 in his only true 5K race of the season so far.  After adidas being cancelled two weeks ago he'll be itching for a strong performance this weekend.  Last year Bream placed 4th in this field running 16:02.  At Friday Night Lights he showed to be 20 seconds faster than he was a year ago, so under 15:40 could happen this weekend up front.

It won't just be Bream up front with 5 others who have broken 16 this season entered in the field in Jack Holbrook (R.J. Reynolds), Ben Hawley (Chapel Hill), Jack Dingman (Northern Guilford) and his teammate Ian Harrison.  He'll also face off against a trio of Cary athletes in Anton Idhammar, Brian Picone and Jackson Martin who were all under 16 in 2017.  Sophomore Dingman has been strong this year taking 8th at Friday Night Lights and 13th running 15:57 at Hare & Hounds.

Senior Erick Ramirez-Ramos (Surry Central) will be one to watch in this field as well after taking 6th at Friday Night Lights in 16:00.  Ramirez-Ramos ran 16:00 at his meet last year winning the invitational section in a big breakout performance.  He'll face off against his 2A rival Ben Armentrout (Atkins) who ran 16:00 last weekend. George Hotelling (East Chapel Hill) took an impressive 7th place finish at Friday Night Lights in his only 5k of the year running a PR of 16:09.  Cam Milroy (Page) will be a guy to keep an eye on as well after running 16:16 at the Guilford County meet a on this course month ago ahead of Jack Dingman.  Milroy has yet to compete against a strong field.

At Friday Night Lights Chapel Hill and Cary took 2nd and 3rd but were separated by just 6 points.  Cary had four boys in front of Chapel Hill's #1, but lacked a 5th man.  Chapel Hill had an impressive 1-5 gap of 14 seconds and a 16:52 average.  Junior Griffin Nicholas didn't race at Friday Night Lights and has yet to debut this season.  This would make a major impact in the team battle and state rankings if he were to debut for Cary tomorrow in good form.

Panther Creek was just 22 points back of Chapel Hill at Friday Night Lights led by possibly the states best 1-2 punch in Bream and Harrison.  Like Cary, Panther Creek lacked a 5th man.  If they can have a strong day through their 5th they could get a slight upset over Chapel Hill and Cary tomorrow. We'll see some other strong squads test themselves tomorrow in Apex, Ardrey Kell, Cary Academy, Pinecrest and R.J. Reynolds.  These are all very strong teams within their region and will look to take the next step forward tomorrow.