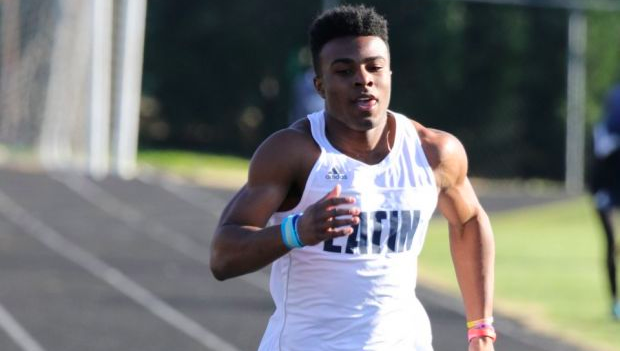 CISAA Championship Timers, Perfect Timing Group, said their sensor wasn't working properly, thus the 100 results not being valid from the meet.  They will have updated results up tonight.  Hate to hear it, but from the video below Stradford still dusted a field of sub 11 100 meter runners.  It's safe to say he's going to make his mark next week at the NCISAA State Championships.

Some certainly unexpected news today was Charlotte Latin's DeMarkes Stradford clocking 10.13 at the CISAA Conference Championships at Providence Day School. Stradford dropped .49 seconds off his PR to emerge quickly to a US#3 mark under all conditions.  He sits behind Kalon Barnes (Silsbee, TX) and Anthony Schwartz (American Heritage, FL) who both hold times that were slightly wind aided.

Stradford came into the conference meet as the NCISAA 3A favorite, but was NC#7 this season.  Stradford has certainly been a stud on the track going undefeated in the 100m dash since his sophomore year. He's also won the last two NCISAA 3A State Championships in the 100, and was the 200m dash champ last year as a sophomore.

Stradford seems to be a football first guy.  He's a 3 star Running Back that's committed to Harvard accounting to 247 Sports.  We're not sure if Stradford's planning to also run track for Harvard, but being a dual sport athlete is certainly a lot harder on the collegiate level.

I don't believe there was a wind gauge at the CISAA Championships, however we were at at a meet at Providence HS, 3 miles down the road from Providence Day.  I can't say there were really any winds that were that insane to lead to this performance.

DeMarkes Stradford just crushed the 100m in 10.13 at CISAA Champs! Not only is that a new NCISAA & Latin school record, it ranks him as one of the top sprinters in the country. @langstonwertzjr @milesplit #GoHawks pic.twitter.com/uA6T0Uox73

Stradford will head to the NCISAA 3A State Championships next Friday and Saturday where all eyes should be locked in on him as we could see something really special in the sprint finals from him once again.