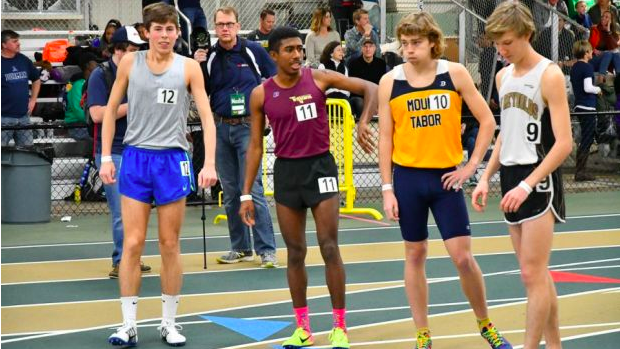 It's hard to picture the indoor miler state record holder Cameron Ponder (Mt. Tabor) not winning this event after his 4:11 Mile at Camel City last weekend.  Ponder will likely run the 4x800, 1600, 1000 and 3200 hoping to sweep the distance events over a talented 3A field.  Laderique McNeill (Harnett Central) didn't shy away from Ponder in XC and I don't expect him to here.  He has a PR of 4:21.42.  Michael Moerk (Tabor) and Brandon Hernandez (A.L. Brown) have both run 4:24 this indoor season and should be battling for top spots as well.  What will the strategy be for the boys to take down Ponder, who will likely be hoping to sit and kick on the field.

Ponder is also the 1000m state record holder after his 2:27.37 from the VA Showcase. He'll have two events under his belt, but will likely look to keep an eye on the leaders and make his move over the final 200.  Kyle Durham (Weddington) has the second fastest seed at 2:34.59 with John Hasteadt (Swansboro), Davis Turner (Asheville) and Will Mazur (Weddington) at 2:35. Moerk will look to follow teammate Ponder as he'll need to score high points for Tabor to be in the running for the team title in this event.  Also don't count out Ricky Kidwell (Swansboro).  He's the 12th seed, so might not make the fast section.  But if he does, he was the 3A State Champion last outdoor season in the 800 and certainly has the wheels to contend here.

David Melville (Northern Guilford) had won the last two XC state titles before being outkicked by Ponder this season.  He's in the same boat after winning the last two indoor 3200 individual titles, and it wouldn't surprise me to see him scratch the 1600 to focus on getting the win here.  Ponder will likely be running his fourth individual event of the day, and will battle against Melville, Ben Verchick (Union Pines) and Laderique McNeill (Harnett Central).  I'd expect this race to go out at an honest pace in order to hope to catch Ponder on tired legs and put some distance on him so he can't sit and kick on the field.  Verchick ran a 9:22 at the VA Showcase and could surprise some people in this event tomorrow.