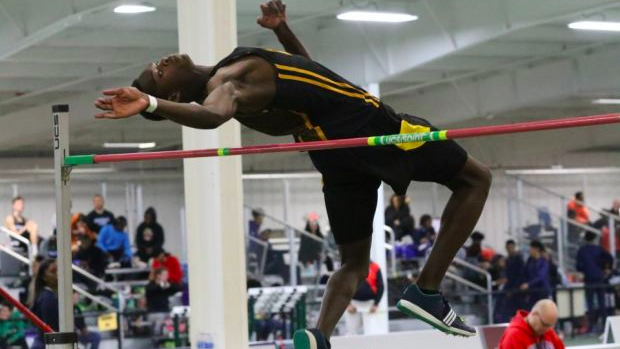 We caught up with recent 6-9 High Jumper Charles (Omar) McBride out of Apex High School.  Omar is currently NC#1 and US#7 and NC#9 All-Time Indoors as a junior.  McBride competed at Apex Friendship his first two years of high school, but was redistricted to Apex HS after the end of his sophomore year.  Moving to a new school didn't slow him down at all as he is in the middle of a breakout year in high jump.  McBride answered some questions for us below on moving schools, his recent jumping success and his thoughts on the NCHSAA 4A State Championships next weekend.

NCRunners: As an elite track athlete moving to a new school, what advice would you give others in a similar situation?

Charles (Omar) McBride: My only piece of advice would be keep doing what you're doing. Just because you changed schools doesn't really change the fact that you have to compete and give it your best effort.

You started off the year strong in the high jump with a 6-7, then last weekend you improved to 6-9.  What's been the biggest difference in this indoor season and the last where your PR was 6-0?

The biggest difference was that sophomore year I was intimidated, but by the end of sophomore year, the fear and anxiousness was gone.
Was 6-9 something you thought was a possibility this indoor season?

Not in indoor, but it was something I wanted to accomplish during outdoor.

You're currently NC#1, US#6 and the top junior in the nation.  Is it surprising to see your name so high on the national list, or was it an expectation to you?

It's somewhat surprising, but I had set it as a goal.

Last season you were 12th indoors and 4th outdoors at the NCHSAA State Championships.  What expectations do you have for yourself heading into this year's state championship?

Honestly, I expect to place and I hope to win.

What's your process during competition?  Do you prefer to enter the competition at lower heights, or do you like to wait until the bar gets up high?

I prefer to start at 6 feet because, right now, it's a height I'm comfortable at. Plus, it's a medium height and that's where some people start going out.

How do you deal with missing attempts at heights you know you can and should clear on the first or second attempts in competition?

I like to slow down my approach, because if I know I can clear it, I shouldn't be worried. Prior to this year, though, I would get angry and let negativity get into my head.

When did you find a passion for track and field and specifically High Jump?

I started Summer Track when I was 10 years old, and began High Jumping at the end of that first season. I was passionate in High Jump from the start, partly because I knew that I could be competitive in it but also because it came really naturally to me. I was really excited to learn it.  Mom adds: You're welcome (I was his first HJ coach; I take full credit!).

What goals do you have set for yourself going forward in both High Jump and Triple Jump?