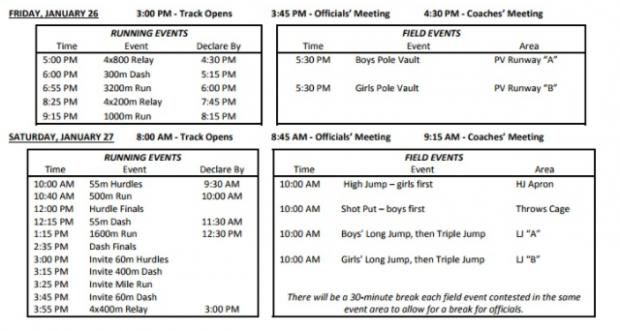 Weddington, Green Hope and Chapel Hill are set to battle tonight to kick off the RHFitPro Elite Invitational.  Weddington girls ran 9:42.76 and currently hold the NC#1 spot, but I fully expect that time to go down tonight.  Green Hope has run 9:49.96, and Chapel Hill 9:51.28 with no one to push them towards the end of the race.  These are three of the states deepest distance programs, and I think it's going to be a back and forth battle across all four legs.  Southeast Raleigh and Rocky River will look to upset the favorites heading into the meet.

Green Hope and Weddington likely have two of the best 4x8 squads in NC this season and will square off tonight.  Green Hope has run 7:55.27, but we won't know who they're going to run tonight.  They'll likely have an A and B squad capable of running sub 8 by the end of this year, so whoever they decide to run should be in contention.  Weddington has run 8:09.70 this season, and will be looking to challenge the 8 minute barrier.  Top 2 legs Kyle Durham and Will Mazur currently sit at NC#5 and NC#9 in the 1000 so far this year.

This might be the best event of the night.  NC#1 Doug Dracon (Weddington), NC#3 Emerson Douds (Weddington), NC#7 Jalen Herring (Middle Creek) plus Ethan Fogle (DC) who has run 34.68 this year.  They'll also have Brian Williams (Southeast Raleigh) and 1:05.99 500m man Anthony Morgan (Grimsley) against them in the fast heat.  This race is loaded and should produce many times under 35 seconds.

We could see a sub 11 mark, or close to it, tonight in the 3200 who is anyone's race for the taking.  Frances Whitworth (Mt. Tabor), Madeline Hill (Cuthberson), Kelsey Vogel (Green Hope), Chandler McCaslin (North Lincoln) headline the field along with Georgia twins Camryn and Marisa Petit.  Bailey Reutinger (West Forsyth), Jonna Strange (North Iredell) and Alexis McDonnell (Hough) all had really strong XC seasons, and could post a break out performance in this field.

These guys are going to be ready to roll with a lot of distance studs making their indoor debut including Peyton Barish (Green Hope), Sam Thornton (Cardinal Gibbons), Ryan Kemper (Green Hope) and Nickolas Scudder (Millbrook) as well as Virginia star Karl Thiessen (Abingdon).  Thiessen has run 15:09 for 5K and certainly has a 3200 PR coming if he's in shape.  This race should certainly go under 9:30 with sub 9:20 being a possibility.

You couldn't ask for much more in a 4x200 than Southeast Raleigh, Parkland and Hillside.  Southeast Raleigh is going to be tough to beat if they're rolling out their A-team with a seasons best of 1:43.88.  Parkland and Hillside have run 1:45.00 and 1:46.09 respectively, but I don't think we've seen the best yet out of them this season.  Mallard Creek is also entered, and ran 1:43.60 outdoors back in November, but will likely be in an earlier section due to seeds.

Parkland boys have been really strong this year running 1:29.33 up at Liberty two weeks ago, but will battle with Southeast Raleigh who ran 1:30.18 at JDL and Weddington who ran 1:28.62 on an outdoor track.  I'd be surprised to not see a new NC#1 Indoor mark out of this one.

We should see a fast 1000 between Sarah LaTour (Cuthbertson), Jenna Reiter (West Carteret) Eliza Broce (West Forsyth) and Sarah Parrish (Providence).  LaTour won this race last season clocking 3:00.73 while Reiter has run 3:01 this indoor season.  Broce and Parrish have run 3:05.88 and 3:06.17 respectively, and will be looking to get closer to the 3 minute barrier tonight.  We've seen two girls (Elise Wright and Alex Rodman) break 3 this year, will any of these girls be able to join them?

Lindsay Absher (West Forsyth) will go after the indoor state record again.  This will be her second meet since clearing 13-0 tying the NC#2 All-Time mark.  This is a strong field with many girls hoping to go over 12-0 including McKenna Brunick (Leesville), Elise Hall (Leesville) and Riley Felts (Weddington).  Let's hope we can see our second state record of the indoor season fall tonight.