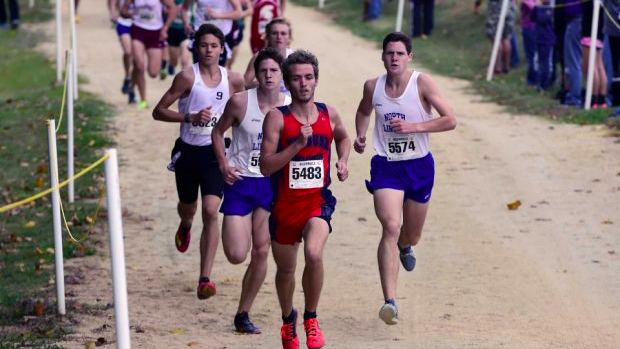 Last year we saw Dakota Mendenhall (Forbush) lose a heartbreaker at the NCHSAA 2A State Championships as he was edged by Noah Graham.  On the track he was denied by Graham narrowly a handful of times.  Now a senior, Mendenhall has proven he's not messing around this year, and wants to win the 2A crown, and he doesn't want it to be close.  His 2A Midwest region is arguable the toughest this year individually.  He handled that field by 22 seconds one what he said was an easy day.  Mendenhall is going to go after it tomorrow, and I'm expecting a fast, dominant win from him.

There are plenty of other stars in 2A on the boys side this year, though it'll be hard for anyone to steal the fame from Mendenhall, it isn't a 100% lock.  Nathan Richards (Franklin) was 6th last year.  Just last week he ran the fourth fastest time ever at Asheville Christian Academy's home course of 16:08 and holds a seasons best of 15:59.  He really has run too many fast courses this fall, and is somewhat of a wildcard heading into tomorrow.

Justin Todd (Ledford) scored a big second place finish over his 2A Midwest rivals last week including Landon Maxwell (East Gaston) and Brian Risse (North Lincoln).  All three of these guys are in contention tomorrow and I'd expect them to battle up front.  Risse has run 16:00, Todd's PR is 16:03 and Maxwell has run 16:15, but seems to be pretty fit after a third place regional finish.

The true wildcards are Skylar Stultz and Zach Hughes (First Flight) who have posted some very fast times, but haven't seen much competition this year.  They holds PRs of 16:20 and 16:21 and will be looking to lead First Flight to a team title.  Erick Ramirez-Ramos (Surry Central) holds the third fastest PR in the field, but had an off day at regionals.  He's run 16:00 at Hagan Stone and should be in contention for a top 5 finish tomorrow.

There are two teams that are in real contention tomorrow, and that is First Flight and North Lincoln.  We knew North Lincoln would be good this year, and they've exceeded expectations putting 5 boys under 17 this season.  First Flight has been the real shocker dominating all of their local competition putting 5 under 16:44.  We haven't seen First Flight against any of North Carolina's stronger programs, but they're going to come into this race fired up to bring a team title back to the East.

If either of these favorites falter Durham School of the Arts, NC School of Science & Math, Lake Norman Charter and Ledford will be knocking on the door in hopes for a podium finish.  I should be tight amongst these four teams as they're very close in the virtual meet.